On 30 June 1908 at 07h 17mn 11s (local time), there was a violent explosion in the Siberian forest heard distinctly in the small town of Vanavara 60 kilometres away.

It was later found that a meteorite or small asteroid 100 metres in diameter weighing a million tonnes (orders of magnitude) had plunged through Earth's atmosphere and exploded 8 km from the ground.

The forest was completely destroyed over an area of 20 km² and the damage from the heat wave extended over more than 100 km, while the sound of the explosion was heard at a distance of 1500 km. The cloud of ash produced spread all over Europe, right down to Spain. The energy released by the explosion has been estimated at 15 megatonnes.

Because of political troubles, the first expedition only arrived in 1927, but scientists found neither crater nor debris. On the other hand, entire pine forests had been laid flat, blown over by the shock wave. After the cold war, two new expeditions were organised in 1958 and 1961, and researchers discovered myriads of silicate spherules spread over a vast surface around the point of impact.

An American study in 1993 concluded that the explosion had been produced by the disintegration of a small comet nucleus composed of frozen gas which melted and dispersed as a rain all around the area. 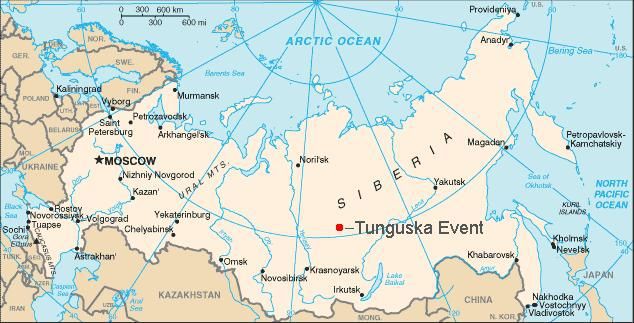