On 11 August 1999 there was a total solar eclipse visible over Europe from southern England down to northern India. This phenomenon is very rare in any location: the previous total eclipse visible in Europe was on 15 February 1961 and the next will be on 3 September 2081.

The 1999 eclipse augured well: it occurred in summer during the holiday period in the middle of the day when the Sun was at its highest. Tens of millions of spectators were expected within the total eclipse zone, where the Sun would be completely hidden: a zone less than 200 kilometres wide, stretching from the south of Nova Scotia to the Gulf of Bengal. In England the zone extended from Cornwall to the Channel and in France to the north of a line between Le Havre and Strasbourg. The total eclipse phase lasted less than 3 minutes, quite short compared with the great total eclipse of 1973 observable in north Africa (total of 7 minutes).

Several countries including the UK and France issued commemorative stamps for the eclipse.

Unfortunately, in 1999, the weather was an unwelcome guest at the event. On 10 August rain had arrived in northern France and England and the forecast for the next day was bleak. It was therefore under clouds that most spectators experienced the 11 August eclipse. One or two small regions were lucky enough to have clear skies.

The Moon's shadow advancing over the Earth on 11 August 1999. Note the many clouds masking the show on Earth. Photo taken from the Russian space station Mir.

To the east of Reims, the clouds cleared during the partial phase, as the Moon slowly started to nibble into the Sun. The reduction in light was only observed ten minutes or so before the total eclipse. The landscape became pale, then there was a sudden cry: "The shadow!" From far off, speeding at over 1000 kilometres an hour, the shadow of the Moon fell over the spectators. Everybody was then able to gaze up at the sky: the solar corona blazed out around the occulting disk of the Moon. Through telescopes it was possible to admire the solar flares that shot out their red flames at the edge of the Sun. The 3 minutes of total eclipse passed and suddenly a flash of light signalled the end of the show: the Sun was back again. 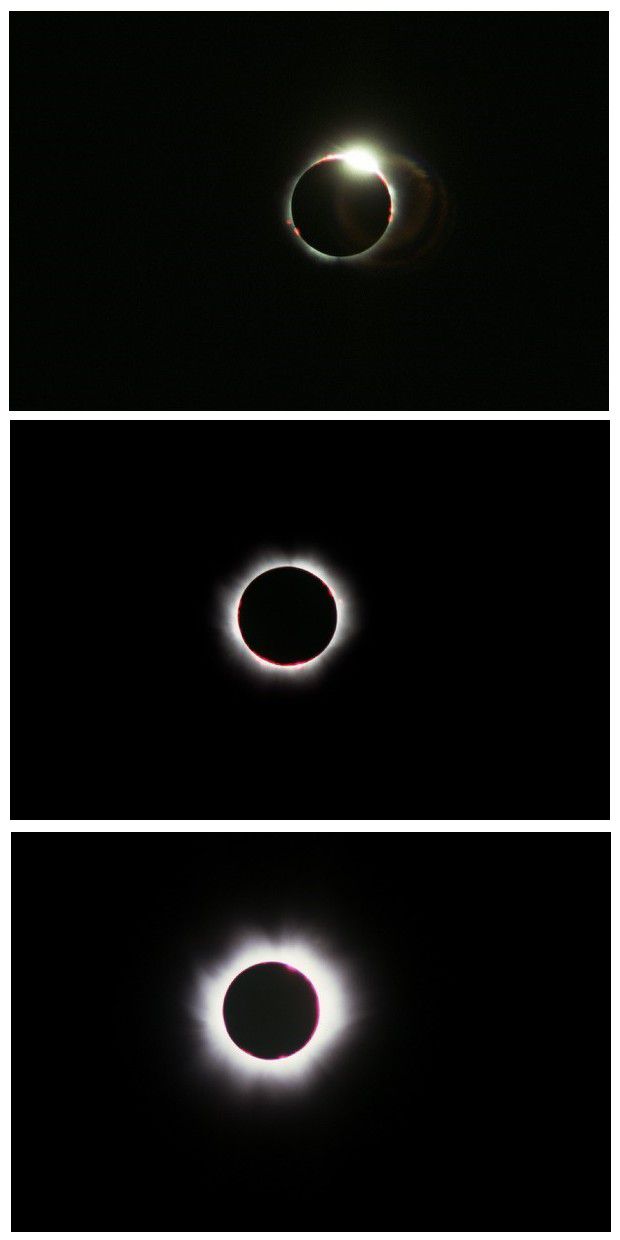 Three photos taken in succession during the total phase. They show the last ray of sunlight and then the appearance of the flares and the corona. Credit J-B Feldmann