The Mount Palomar observatory is in California at an altitude of 1700 metres. From 1947 to 1975 it housed the largest telescope in the world.

The history of Mount Palomar observatory

The story of this observatory actually began in 1890 in southern Los Angeles. This is where the Mount Wilson observatory was built, receiving the 2.5 metre diameter Hooker telescope in 1917. This allowed the astronomer Edwin Hubble to pursue his work in the 1920s which led to the idea of an expanding universe. It was quickly realised that a still bigger instrument was needed to carry on with research on galaxy speeds and distances. A plan for a telescope twice the size was proposed; but the Mount Wilson site is a victim of Los Angeles's light pollution.

In 1934, another summit, Mount Palomar, was therefore chosen, where the observatory was built that has housed a 5.08 metre telescope, called Hale in honour of the American astronomer, since 1947. Edwin Hubble worked with this telescope until his death in September 1953.

The Hale telescope has been used for very many observations for over sixty years. The Mount Palomar observatory also has two other instruments, a 1.52 metre diameter telescope and a 1.22 metre diameter Schmidt telescope equipped with a very wide field CCD camera to detect Earth-grazing asteroids. 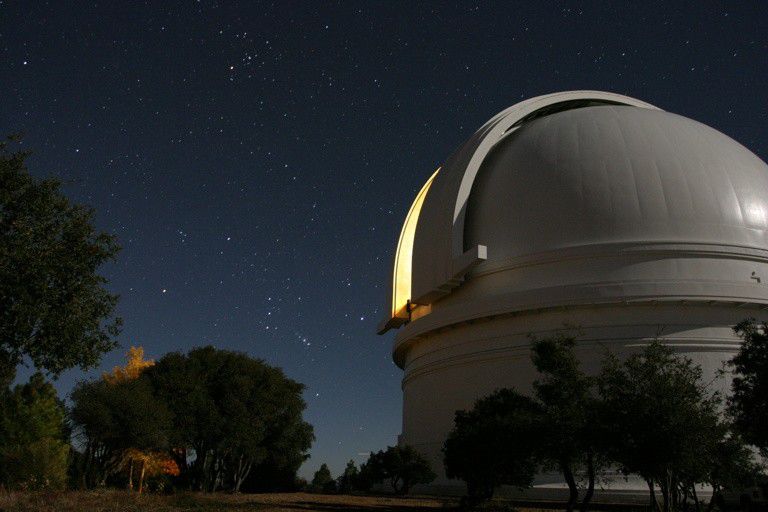 The dome of the Hale telescope on Mount Palomar. © Caltech