The word " mercury" denotes a chemical element and a planet.

Mercury is a very bright metallic element with atomic number 80, atomic mass 200.59, density 13.6 g cm-3, a liquid at STP with a melting point of -38.87°C. It occurs in the form of a sulphide, cinnabar, and is mainly used in instruments for physics and for extracting gold.

Mercury is the closest planet to the Sun, and is also the smallest now that Pluto is no longer considered to be a planet. Its apparent trajectory in the sky makes observing it from Earth extremely difficult: Mercury is never more than 28° from the Sun and the best telescopes cannot obtain a resolution of more than 700 metres.

Our knowledge up to now has been very fragmentary and approximate, and most of what we know has been brought to us by the American probe Mariner 10, which flew over Mercury three times in March 1974, September 1974 and March 1975.

Its orbit has an eccentricity of 0.206 and an inclination of 7° to the ecliptic plane, making Mercury a remarkable planet in the solar system (here too, only Pluto had such an elliptical and inclined orbit); Moreover, its sidereal period of rotation on its axis (58.646 days) is exactly two thirds of its sidereal period of revolution around the SUN (87.97 days). This ratio of 2/3 between rotation and revolution is due to the braking action of solar tides on the rotation of Mercury. Theoretically, this braking should produce a ratio of 1/1, but the observed synchronisation, so-called metastable in a 2/3 ratio, can only be conserved if the orbit is highly elliptical, which is indeed the case, and if the planet has a pronounced mass distribution anomaly, which is therefore highly likely. What is more, the largest impact crater on Mercury, the Caloris basin, is close to the theoretical position of this mass anomaly.

Mariner 10 also made accurate measurements of the ground pressure (10-12 atmospheres, or 10-9 hectopascals) and the day temperature (430 °C near the perihelion and in the neighbourhood of the subsolar point) and night temperature (- 170 °C in the equatorial regions). The high density of Mercury indicates a very high proportion of iron compared with silicates. If the internal composition of the planet is differentiated, this means there is an iron core with a radius of 1830 kilometres and a silicate mantle only 610 kilometres thick.

This hypothesis appears to be borne out by the magnetic field detected by Mariner 10, at a value of 400 gammas (400 nanoteslas), indicating that the probe crossed the magnetosphere created in the planet's internal dipole field. This field very likely comes from an internal dynamo in the core, which itself indicates that the planet is almost certainly differentiated.

The main geological information about Mercury was collected by the Mariner 10 cameras. They provided photo coverage of 40% of the surface between longitudes + 10° and + 190° with a mean resolution of 2 kilometres; at points, the resolution reached 200 metres and 20% of the surface was photographed stereoscopically.

On all planets without an atmosphere, such as Mercury, the chronology of craters can be established from how fresh they are. Recent craters are intact, whereas old ones have been degraded by other impacts. On Mercury, as on the Moon, an estimation of the number of craters depending on their relative age shows that the once very high impact frequency has considerably diminished over time.

Craters make it possible to date Mercury’s terrains: the old terrains, exposed to bombardment longer, are highly cratered, much more so than young terrains. This spread of crater density forms a " fossil stratigraphy" and makes it possible to establish a relative, but precise, chronology.

Applying this method, we observe that 80% of Mercury's surface is composed of very old terrains: these are the so-called inter-crater plains and highly cratered terrains. Ten percent of the surface is formed of averagely cratered plains, called intermediate plains, which vary from a relatively abundant region (7%) still heavily cratered, to a very sparse region (3%) with very few craters. The rest of the planet is composed of smooth plains, with little or no craters, and therefore recent. Comparing crater counts on Mercury and the Moon, where the absolute ages of terrains have been determined by isotope dating, we can estimate the age of recent plains as 3.8 - 3.9 billion years and of inter-crater plains as at least 4.0 - 4.2 billion years.

This stratigraphic scale can be refined by classifying the craters according to their state of deterioration and their distribution density. Overall mapping makes it possible to determine the relative areas of these terrains, and we can know how the processes by which they were formed evolved with time.

This tells us that the plains were formed very early on in the history of the planet. This process was very active up to 4.1 billion years ago, and then rapidly declined and stopped almost completely around 3.9 billion years ago. An intense but brief reactivation occurred around 3.8 billion years ago, but since then there does not seem to have been any substantial production of new terrains on Mercury.

Two types of reasoning seem to indicate that there has been volcanic activity on Mercury.

There is also a remarkable absence of lines characteristic of iron in olivines, lines which should be there if the composition is of ultrabasic chondrites. These spectral studies show that the surface of Mercury is remarkably consistent, as confirmed by examining its albedo. Unlike the Moon, Mercury has no dark and light terrains (lunar seas and lunar continents).

The surface of Mercury thus turns out to be wholly made up of very old volcanic terrains completely broken up by meteorite impacts on the inter-crater and intermediate plains, with an intense but brief volcanic episode later producing smooth plains that have remained relatively unscathed because of rarer meteorite activity.

Composition of the atmosphere: 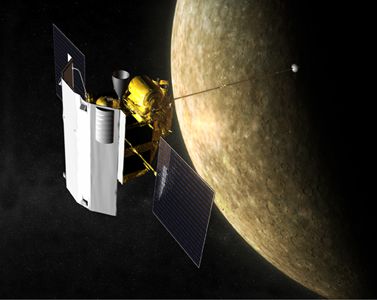