On 7 August 2006, the professional Australian astronomer Robert H. McNaught, a specialist in the search for asteroids and comets, discovered a new hirsute body named C/2006 P1.

This comet passed its perihelion on 12 January 2007. It then reached a magnitude of 1 but its position in the evening above the western horizon made observation difficult in the northern hemisphere. However, it was possible to see the bright spot of its nucleus with the naked eye about half an hour after sunset. In the following weeks, the comet continued to increase in brightness, reaching a magnitude of -2. It then became visible in the southern hemisphere and the splendid show was admired everywhere. C/2006 P1 is considered to be one of the brightest comets of the last century. It passed a decade after two other beautiful space travellers, the Hale-Bopp comet and Hyakutake's comet.

Studies carried out by a team of researchers at the Mullard Space Science Laboratory showed that McNaught's comet was truly gigantic: the Ulysses probe took 18 days to cross its tail, compared with only 2.5 days for Hyakutake's comet, which nevertheless held the record for the longest tail ever measured from Earth.

Between 1978 and May 2010, the astronomer Robert H. McNaught discovered over 50 comets, making him the most prolific comet discoverer of all time. 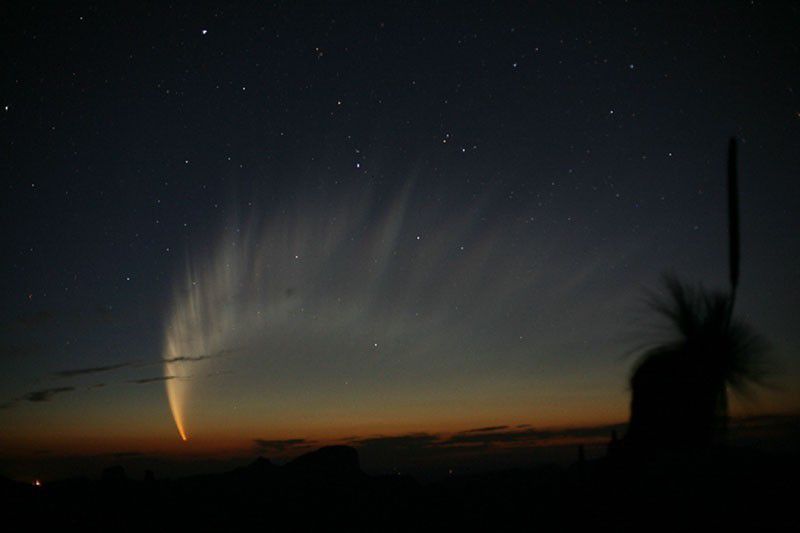