The Great Red Spot (GRS) is a gigantic cyclone that can be seen on Jupiter. The French astronomer Jean-Dominique Cassini was the first to point out this atmospheric formation in 1665. The storm, which has been stable for several centuries, rotates anticlockwise every six days in the southern hemisphere, a few kilometres above the planet's gaseous atmosphere.

Observations using large Earth telescopes show complex movements of gas within the GRS. The hottest gases and chemical compounds (ammonia and aerosols) rise in the centre of the spot (where the temperature is 3 or 4 degrees higher than in the rest of the GRS) and then fall as rain. On the edge of the spot winds have been recorded at over 400 kilometres/hour.

The Great Red Spot is a very popular subject with amateur astronomers: it can be seen using a simple 60 mm diameter telescope. Using it as a marker, Jupiter's speed of rotation, the fastest in the entire solar system, (less than 10 hours) can be understood. 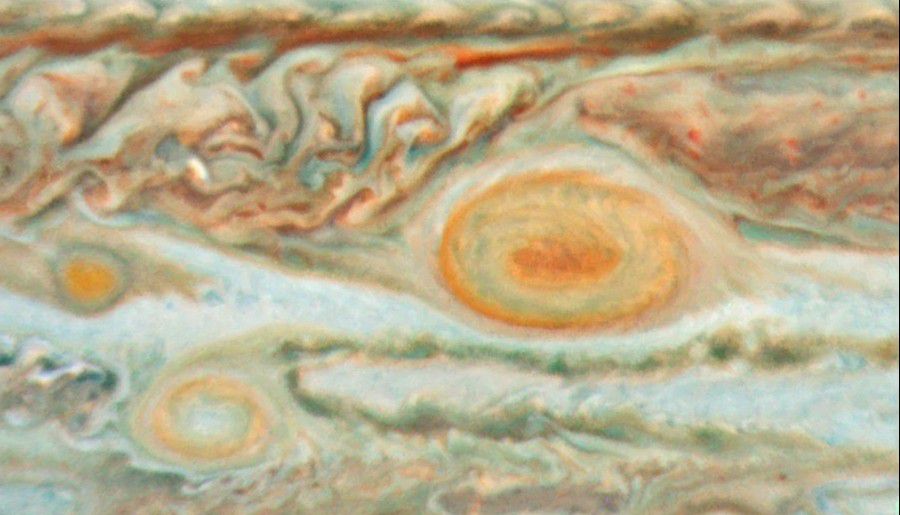 The Great Red Spot and its neighbourhood photographed in the visible spectrum by the Hubble telescope in May 2008. Credit NASA