The constellation of Cancer is one of the 13 constellations of the zodiac that the Sun passes through every year. It is between the constellation of Leo to its left and Gemini to its right. There are three main stars in this constellation. These are Al Tarf, a giant orange star which is the brightest in the constellation, Acubens, which is actually a system of 2 stars rotating around each other, and Tegmine, a quadruple star. A meteor shower is associated with it: the delta-Cancrids, active from 1 to 24 January.

This constellation was named the Tortoise by the Babylonians and the Scarab beetle by the Egyptians. The Greeks called it "the Gate of Men", because they believed that it was through this constellation that souls took possession of bodies at birth.

In Greek mythology this constellation represented a crab that Hera sent to Hercules during his combat with the hydra, and which was crushed. 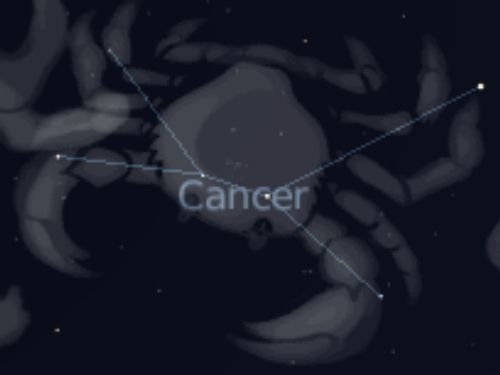