A cepheid is a giant variable star pulsating at a very regular rate. The first star of this type to be discovered was Delta Cephei, in the constellation of Cepheus, which gave its name to all similar variables. The amateur astronomer J. Goodricke discovered its variability in 1784.

Unlike many variables of which the light fluctuation is produced by the rotation of one star around another, the pulsing of the cepheids is the result of regular swelling (caused by gas pressure) and gravitational contraction movements. These changes in size are accompanied by changes in temperature and therefore in brightness.

At the beginning of the 20th century, the American astronomer Henrietta Leavitt discovered that there was a relationship between the cepheid's period and their brightness: the longer the period, the brighter the star. By observing the variability of the cepheids, it became possible to determine their absolute brightness and therefore their distance. The discovery of this period-brightness relationship would make it possible to measure the distances of galaxies up to 80 million light-years away, the threshold beyond which the biggest telescopes can no longer detect single stars in a galaxy.

More than a century after the discovery of cepheids, astronomers continue to refine the absolute calibration of the period-brightness relationship by attempting to determine the distances of several nearby cepheids with ever-greater accuracy. 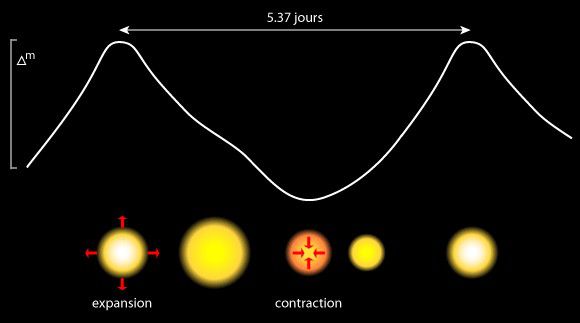