The Big Crunch is the cosmological model that is in a way symmetrical to the Big Bang in which a closed universe eventually re-contracts after an expansion phase.

In this final phase of the universe, the temperature and density rise once more, destroying material structures such as galaxies, planets, atoms and even nucleons. The cosmos will return to the state of a plasma of quarks and gluons. In this model, if only the classical equations of general relativity are used to describe space-time, a gravitational singularity will be reached: space and time will disappear with the matter they contain. But quantum effects, such as those found in superstring theory or the theory of loop quantum gravitation, could prevent the formation of this singularity. The universe would reach a minimum size before bouncing back into a new expansion phase. The discovery of the accelerating expansion of the universe suggests that it will never end, and that therefore the Big Crunch will not happen.

An ending that depends on dark energy

Nothing certain is known on the subject given that we do not know the nature of the dark energy assumed to be responsible for this accelerating expansion. Thus, the universe will nevertheless end in a Big Crunch ifdark energy is described by a scalar field of which the energy density varies in such a way that it will end up becoming attractive rather than repulsive (thus, there are supergravity models, like the one advanced by Renata Kallosh and Andrei Linde, in which the acceleration of the universe stops and changes into contraction to finish in several tens to hundreds of billions of years in a Big Crunch). 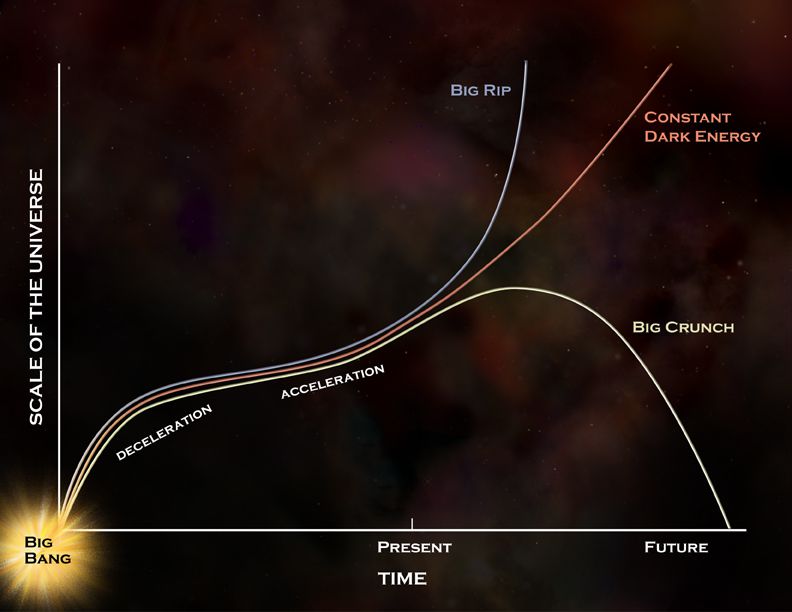