This comet was discovered in 1969 by the amateur astronomer Jack Bennett. Born in 1914, J. Bennett spent two decades (from 1960 to 1980) visually observing the sky. Having settled in South Africa, he wanted to compile a catalogue of all the nebulous objects in the southern hemisphere that could be mistaken for a comet, and produce the equivalent of the Messier catalogue which was created two centuries earlier by the French astronomer Charles Messier for the northern hemisphere. Bennett's painstaking work led to his discovery of two comets and a supernova in the M83 galaxy (he was then the first person to visually discover a supernova since the invention of the telescope).

It was on 28 December 1969 that J. Bennett discovered his first comet, C/1969 Y1. It passed its perihelion on the following 20 March. During April 1970 it was a beautiful sight, similar to West's comet six years later: Bennett deployed a gas and dust tail of about 30 apparent degrees and its magnitude of 0 made it perfectly visible to the naked eye even when it was not completely dark. Observations revealed that the comet's head is surrounded by a hydrogen cloud 13 million kilometres in diameter.

Observation of this comet was on the Apollo 13 lunar mission's programme, but the explosion of one of its oxygen cylinders and the rescue operations that followed ended the scientific programme. 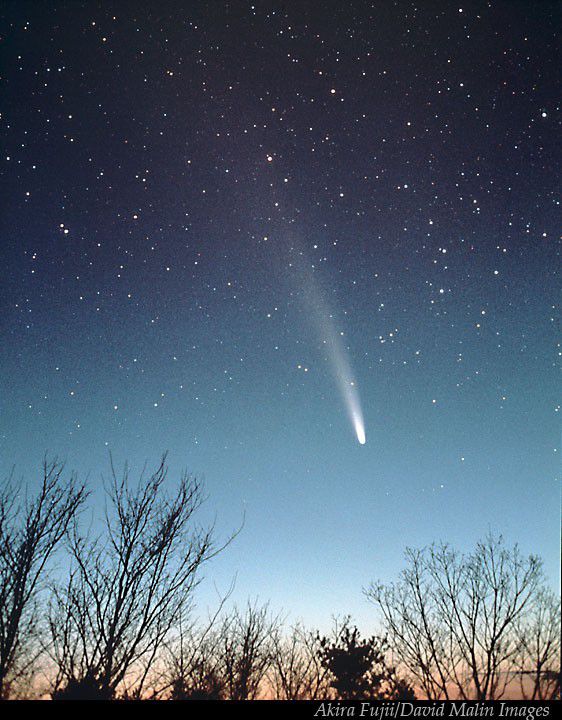 Bennett's comet in the spring of 1970. Credit A. Fujii/D. Malin Images