Robotics is the combination of scientific and industrial fields connected with designing and making robots. Unlike the French term informatique, which was specially created, robotics is from robot, from the Czech word for robota meaning compulsory labour; robotics was introduced by the novelist Isaac Asimov and popularised in a book published in 1942, (Runaround) in which he describes the " three laws of robotics ".

In the industrial domain, robotics produces automatons to carry out precise tasks on assembly lines. Robotics also produces robots able to move in dangerous environments : (polluted, radioactive etc.), in the air, under the sea, in space etc. Besides industry, robotics also concerns scientific research, space exploration and military defence and the maintaining of order. It is also used in the medical sector in prostheses, and for assistance to surgeons or nurses.

Robotics has recently spread to the general public with autonomous machines to carry out certain jobs (vacuum cleaning, mowing the lawn etc.) or for entertainment (robot companions, robot toys etc.). 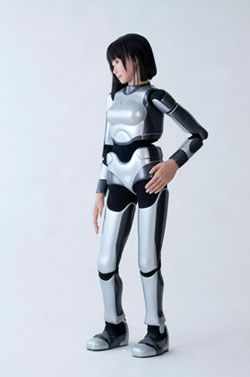 HRP-4C is a humanoid robot that can dance, built by AIST, a Japanese research institute. © AIST