Wave mechanics originated with the work of Louis de Broglie but it was the physicist Erwin Schrödinger who was the real discoverer. Initially it was a restricted formulation of the principles and equations of quantum mechanics set out in several theses by Schrödinger in 1926 which gave particles of matter a wave-like aspect. As Schrödinger himself quickly showed, this formulation turned out to be equivalent to another restricted version of the principles and equations of quantum mechanics, matrix mechanics. Matrix mechanics, initially discovered by Werner Heisenberg in 1925, was quickly developed by Max Born and Pascual Jordan who were the first to understand that the equations discovered by Heisenberg to explain the behaviour of electrons in the Bohr atom actually used matrix theory.

Louis de Broglie first tried to understand the wave-particle duality discovered by Einstein in the case of quanta of light, photons, as well as the mysterious quantum conditions involving whole numbers in Bohr's theory of the atom, more generally in the quantification of the possible energies of atomic and molecular systems. As he explained in his thesis in 1923, de Broglie found the key to the puzzle of these strange conditions by proposing that electrons also have a wave-like character. These quantum numbers then became a manifestation of well known conditions describing stationary waves, for example of a vibrating string or the resonance of sound in a cavity.

Just as the propagation of light can sometimes be described by the model of light rays, even though it is a wave, the trajectories of electrons observed in a Crookes tube should in fact be a manifestation of fundamental wave dynamics. More generally, there should be waves of real matter moving in space-time associated with electrons and protons, the elementary particles of matter known at the time.

Louis de Broglie had studied history before turning to physics. However, his elder brother had introduced him to the problems of quantum physics when he was an adolescent. © Wikipedia, public domain

It was Erwin Schrödinger, informed of the work of de Broglie by an article by Einstein, who drew the attention of physicists to the ideas of the French researcher who had the idea of making a link with the fact that the action S of a mechanical system, and not just that of an electron in a potential, obeys the Hamilton-Jacobi equation.

The old message from the Hamilton's and Jacobi's analytical mechanics

As Hamilton, and later on Félix Klein, had noted in the 19th century, a sort of scalar wave should be considered to be moving in the configuration space of a mechanical system having canonical conjugate variables Pi and Qi.

S determines an equiphase surface analogous to that of a scalar wave in physical space. The families of trajectories that a mechanical system can follow are then analogous to light rays normal to this equiphase surface, but here they are in configuration space. Schrödinger therefore adopted de Broglie's ideas and transposed them into Hamilton's analytical mechanics,but also introduced a number of conceptual shifts that he himself was sometimes not initially aware of.

First there is the fact that the wave is no longer moving in space-time but in a certain fashion in a poly-dimensional space with 3N and even 6N dimensions. These 6N dimensions correspond to the generalised and canonically conjugate variables of the mechanical system in question. This means that they are not necessarily the position and momentum variables of a set of material points. A corollary to this last point is that we are moving away from a simple connection between the movement of a material point and the path of a ray of light, and moving towards a set of differential and integral laws for physical values of which the form is analogous to that governing a system of particles in space and time.

Schrödinger guessed the form of the equation governing the propagation of this wave in configuration space as a function of time. This is wave mechanics' famous time-dependent Schrödinger equation. It uses an imaginary variable i that cannot be eliminated, which means that its solutions may intrinsically be functions of the complex variable. The use of complex numbers is then fundamental and not a calculation trick.

All of classical theory wave theory, i.e. wave interference and diffraction phenomena, does, however, apply, and in particular the Huygens-Fresnel principle. This point is very important in understanding both the final version of wave mechanics that Dirac, Von Neumann and Weyl were to develop from 1927 on, and the formulation that Richard Feynman gave to his famous path integral in these same quantum mechanics. This formulation is central to John Wheeler's quantum cosmology.

Schrödinger and the other quantum mechanics theoreticians were well aware of all this by the end of 1926. The equation that Schrödinger had just given in such a way as to return the equations and ideas of de Broglie for a particle in a potential, clearly provided a general process for quantifying the energy of wide classes of mechanical systems composed of N particles. An form of analytical wave mechanics can therefore be built, replacing classical analytical mechanics.

However, a certain number of problems immediately appear. What is the precise physical nature of this field scalar as Schrödinger called it? How is Lorentz's theory of electrons transformed by this object and what links appear between charged particles and the continuous electromagnetic field?

Is this not a means of completely solving the wave-particle duality puzzle for both light and matter? For Schrödinger this was the case, and a new era began in which electrons had to be wave packets of charge density. The discontinuity in physical values was merely an artefact introduced by the spectral theory of field equations for the wave function associated with a mechanical system. Fundamentally, there were only waves.

The tenants of matrix mechanics blew this beautiful idea out of the water. The linear nature of Schrödinger's equation implies that a wave packet cannot remain in one place over time but will spread out, in contradiction with the observed phenomena and as shown by Heisenberg.

The solution was to be found by Max Born, inspired by Einstein's remarks on the possible existence of a phantom field responsible for atomic transitions in the Bohr atom but not carrying any energy. These transitions (the well known transition probabilities introduced by Einstein using the coefficients Amn and Bmn that are found everywhere in the quantum theory of atom-radiation interaction and which are at the origin of the laser) involved a calculation of probabilities when considering the treatment of the diffusion of a beam of charged particles, as in the case of Rutherford's experiments, and Born was led to introduce the idea that the square of the wave function represented the probability of the mechanical system being in a given state, and therefore at a point, in configuration space. The wave function was therefore a probability amplitude.

An exceptional video of the 1927 Solvay Conference filmed by Irving Langmuir. During this conference, several of the most elegant papers in the history of science were presented. Bearing on the state of quantum theory at the time, and even if they somehow marked the birth of the orthodox interpretation of quantum mechanics, they show that the founding fathers did not agree with each other. Schrödinger, Einstein and De Broglie did not like the Bohr, Pauli, Heisenberg and Born vision. Reports on the Conference can be found in a long article at arxiv (Quantum Theory at the Crossroads: Reconsidering the 1927 Solvay Conference). © Nancy Thorndike Greenspan/YouTube

When considering a function of canonical variables Q, then this function should itself have a determined value using the laws of probability. Fourier analysis applied to wave functions also implies that there must be a wave function for momentum.

Wave mechanics then becomes analytical physics, since the Hamilton Jacobi equation involves the energy function of a system. Indeed, energy is a universal quantity in physics, so as soon as a physical system can be cast into Hamiltonian form, there will be a wave function for that system. This also explains why energy must be universally quantised. 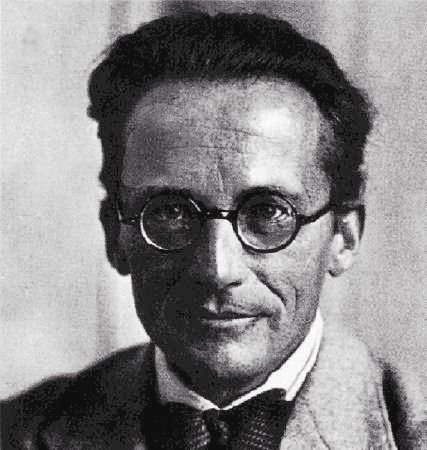