The term vortex is used to denote a whirlpool-like movement of a fluid or particles. It can also refer to a swimming pool accesory (that recreates a liquid vortex).

The principle of the vortex

A vortex is a turbulent circular movement of fluid particles around an instantaneous axis. This type of vortex or whirlpool characterised by an overall flow should not be confused with the vorticity of individually spinning particles.

One particular place where vortices appear is at the wing tips of aircraft (von Karman vortices).

In fluid mechanics, the simplest rectilinear vortices are modelled by velocity fields of the form Vrn=C, where r is the radius vector and C is a constant.

Prandtl’s wingtip vortex model is an example of non-rotatory turbulence (the particles rotate around a fixed direction but do not turn about themselves, in a similar way to the cars of a Ferris wheel). In contrast to this, fluid particles turn about themselves in a flat-plate boundary layer, while their path is quasi-rectilinear, and so this is rotational, not turbulent flow.

Turbulent flow gives rise to both vortices (on a large scale) and vorticity (rotational) on smaller scales where energy is dissipated under the effect of viscosity.

The vortex of hard disk drives

By extension, when a vector field system forms whirlpool-like structures we also refer to a vortex. This is the case for the magnetic field produced by the magnetising hard disk drive surfaces.

Swimming pool equipment manufacturers sell devices with the same name that can be used with a skimmer to accentuate the effect while it sucks up debris. In a filter or pump of the vortex type, the impeller blades are arranged radially around a central point , increasing the suction effect. 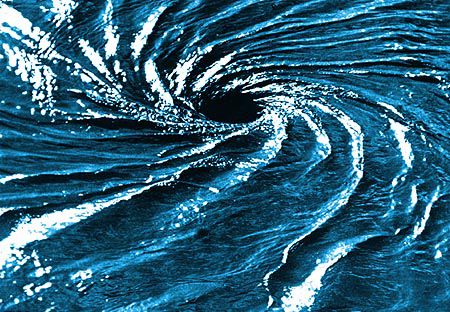