The tunnel effect is a very frequent phenomenon in quantum mechanics playing a role, for example, in the production of energy in stars and responsible for alpha radioactivity.

George Gamow discovered the effect in quantum mechanics in 1928.

If the potential energy of a particle in a diagram is represented as an electron bound to an atom or an alpha particle in a nucleus, it appears as a hill rising and then falling in height depending on the distance separating the particle from its centre of attraction in the system in question.

In classical physics, if the kinetic energy of a particle is lower than the potential binding energy it cannot escape. But things are not like this in the magical world of quantum mechanics where a particle, even with insufficient kinetic energy, can escape from a system as if there was a tunnel through the obstacle of the potential energy hill. This is a direct consequence of the probabilistic nature of the wave associated with the movement of a quantum particle.

The wave function of the particle does not cancel outside the region where it is classically trapped, and so there is a non-zero probability of finding it outside this region.

In quantum cosmology this has been proposed to describe the birth of the universe by theoreticians such as Vilenkin, Zeldovitch and Linde. 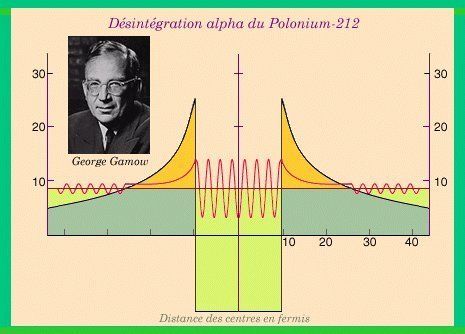