The term "recombination" is used in various fields such as genetics and cosmology.

Recombination is the exchange of genetic information (a strand ofDNA) between two different sections of the genome. A frequent example occurs during meiosis between homologous chromosomes (crossing over).

In cosmology, recombination is the very early period in the universe when the temperature was low enough for neutral atoms to form.

The date put forward using the latest data from WMap is 380,000 years after the Big Bang, when the temperature was around 3000 degrees. At that time, theuniverse was no longer opaque to radiation, and photons could travel long distances before being absorbed or diffused by matter. The photons from that period still exist and form the famous cosmic background radiation with the spectrum of a black body called the Planck spectrum.

The term recombination is clearly inappropriate and is perhaps a remnant of Gamow's Big Bang theory. In this theory the universe "began" with a hot, dense gas of neutrons that was rapidly disintegrated by beta radiation to give the protons and electrons of the cosmos. The electrons would later be recaptured by the protons to form atoms, hence the term "recombination".

This was the beginning of the Dark Ages because there were no stars yet. The period ended with the " cosmic renaissance" during re-ionisation. 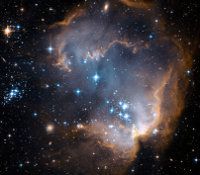 In cosmology recombination is a very early period in the universe. © Seven portraits, CC by nc