The principal Poisson ratio describes the contraction of matter in a direction perpendicular to the applied load.

This ratio was developed analytically by Denis Poisson, a French mathematician (1781 - 1840), the author of works on mathematical physics and mechanics, who determined its value using the molecular theory of the constitution of matter. It is defined by formula 1 opposite.

For an isotropic material, the Poisson ratio allows the shear modulus G to be directly related to the Young modulus E.

The Poisson ratio is then always equal to or lower than 1/2. If it is equal to 1/2, the material is perfectly incompressible.

In the case of a laminate (transversely isotropic), we define a secondary Poisson coefficient using relationship 2 opposite linking E1 and E2. 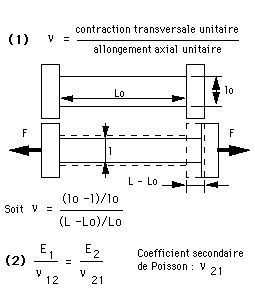