The term Lyman-alpha forest comes from the so-called Lyman-alpha hydrogen spectral line discovered at the beginning of the 20th century by the American physicist Theodore Lyman. It is emitted in the ultraviolet spectrum at 121.6 nanometres by excited hydrogen atoms. The absorption properties of this line make it possible to detect large clouds of primordial hydrogen.

Thus, by observing a very distant source (with a red shift of the order of 2 or more) of which the spectrum is known, absorption lines caused by these clouds can be seen. The absorption line of each cloud is red-shifted by a factor depending on its distance. In the spectra of quasars, a host of rays can be observed corresponding to all the clouds located in the line of observation. This is called a Lyman-alpha forest.

Their study is very important in cosmology, both because it makes it possible to study how the clouds are distributed in space (and therefore test models of how these large structures were formed), and because the quantity of gas in the probed regions can be measured. 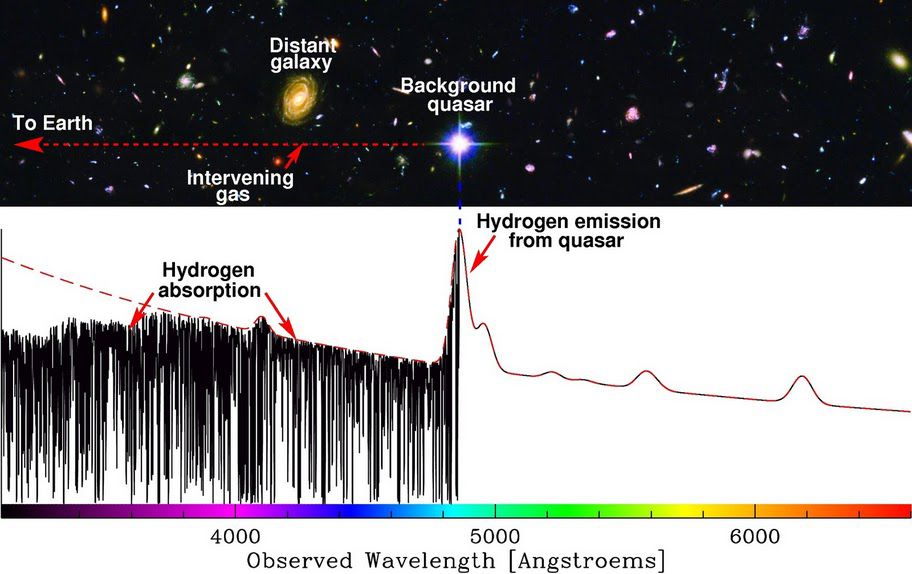 On this diagram the emission line of a quasar can clearly be seen in its spectrum with the Lyman-alpha forest on its left. © Michael Murphy