A laser is a device which amplifies light and focuses it into a narrow coherent beam where waves or photons propagate in phase instead of being in arbitrary phase relation. This property makes laser light extremely directional and of great spectral purity.

A device to supply directional and almost monochromatic luminous radiation by the stimulated emission of radiation.

The word "laser" is an acronym for Light Amplification by Stimulated Emission of Radiation. Today lasers can produce the entire range of electromagnetic radiation, from X-rays and ultraviolet rays to infrared and micrometre waves (see maser).

Optics A laser consists of an amplifying medium placed in a resonant cavity and providing coherent monochromatic waves by stimulated emission.

By exciting the medium, a population inversion is obtained, with abnormal occupation of high energy levels favouring stimulated emission rather than spontaneous random emission (in proportions described by the Einstein coefficients).

Within the cavity, the emitted photons are reflected in such a way as to cause in turn a stimulated emission (the production of photons of the same frequency, the same phase and the same direction of propagation as the stimulating radiation). The wavelength of the emission must correspond to an eigenmode of the cavity (the resonator) for a stationary wave system to be set up. The gain of the amplifier-cavity medium must be higher than the losses (due to reflections and other effects). The stimulus or pumping is achieved by photons of sufficient energy (Kastler optical pumping), by electric currents or discharges (used for example in laser diodes), or by chemical reactions.

The efficiency of a laser - the ratio of deliverable optical power to the power supplied by the amplifier - is of the order of 0.01 to 30% (50% in the best cases). 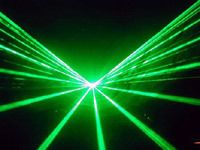