Gravity Probe B is an experiment using gyroscopes in space to test two predictions of Einstein's theory of general relativity. The satellite containing the gyroscopes was developed by NASA and Stanford University.

The satellite is in a polar orbit at an altitude of about 650 km. The gyroscope is composed of 4 quartz spheres covered with a layer of niobium. These spheres rotate and are cooled by liquid helium. In the absence of the effects of general relativity, their axes of rotation should remain fixed in space and point in the direction of a star, IM Pegasi.

The curvature of space-time that explains gravitation in general relativity, and the rotation of the Earth according to this same theory, will induce movements of these axes. The exact values of these shifts could either further validate Einstein's theory, or open the way to a theory of gravitation beyond general relativity. The two effects studied are the Einstein-De Sitter effect and frame dragging. 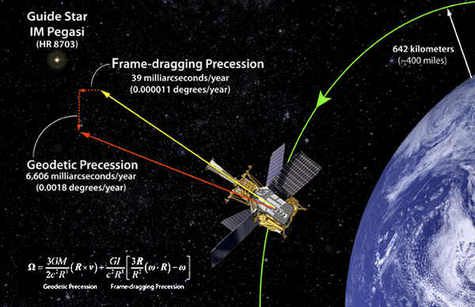