Electrolysis is the chemical decomposition of certain substances by the passage of an electric current.

Electrolysis is carried out in a vessel containing an ELECTROLYTE in which two electrodes are immersed and connected to the terminals of a direct current generator.

This arrangement is an electrolysis cell.

Electrolysis has many industrial applications such as chromium plating, gold plating, electroplating, chlorine production and the production of sodium hydroxide from sea salt.

As an example, the chromium plating of steel is carried out as follows:

· the metal part used as the CATHODE is immersed with a chromium ANODE in a solution (the ELECTROLYTE) containing chromium ions (Cr3+);
· the generator between the anode and the cathode delivers a direct current;
· the metal part attracts electrons and chromium ions, which adhere to its surface. 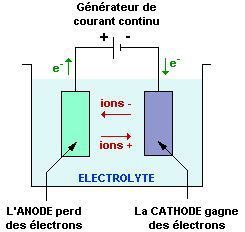