Cherenkov radiation is the blue coloured radiation that is observed in nuclear reactors (where it is responsible for the blue colour of the spent fuel pools) or during the entry of cosmic rays into the Earth's atmosphere, especially under the effect of high energy gamma rays producing an avalanche of secondary particles in the atmosphere.

It results from the shock wave generated by an electrically charged particle travelling through a medium (other than a vacuum) at a speed greater than the speed of light in that medium. The light is then emitted inside a cone of which the opening depends on the index of the medium and also the particle speed. It should be borne in mind that the speed of light in a vacuum is always greater than that of Cherenkov radiation! 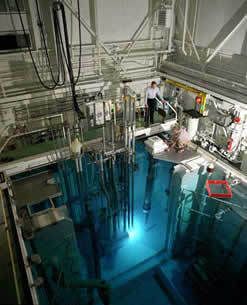 The Cherenkov effect produced by a nuclear reactor.