Bose-Einstein condensate is a special state that can occur in a very low temperature quantum gas.

It was predicted by Einstein in 1924 following work by the Indian physicist Bose, and is based on the principle that bosons (particles with integer spin) can occupy the same quantum state, unlike fermions which obey the Pauli exclusion principle. What Einstein discovered was that for a given boson gas there is a critical temperature below which a macroscopic number of quantum particles populate the state of least energy, forming a "Bose-Einstein condensate".

In such a state, the particles all lose their individuality and the condensate must be described as a macroscopic quantum object. In particular, the wave aspect of matter (cf. the quantum wave-particle duality) becomes visible on a large scale, as is also the case with a superfluid, though a superfluid is different from a Bose-Einstein condensate because of the strong interactions between its constituents.

The first observation of a Bose-Einstein condensate of an atomic gas was in 1995 following the work of Eric Cornell and Carl Wieman who cooled a rubidium gas to below 170 nanokelvins. For this experiment they shared the 2001 Nobel prize for Physics with Wolfgang Ketterle. 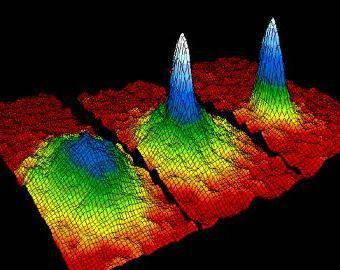 The formation of a Bose-Einstein condensate.