Found in Mongolia and China during the upper Cretaceous, the velociraptor measured 1 to 2 metres long. Its back limbs show evidence of adaptation to running on land. It moved about on three toes: the second had a large curved, mobile claw about fifteen centimetres long. It probably used it to seize rather than stab or lacerate its victim.

Velociraptor belonged to a group of Dromaeosaurids, or dinosaurs close to the origins of birds. In 2007 the discovery of structures on its front limbs helped confirm that Velociraptor was in fact a feathered dinosaur.

Four specimens were found near traces of their prey, and therefore it is probable that the velociraptor lived and hunted in packs. 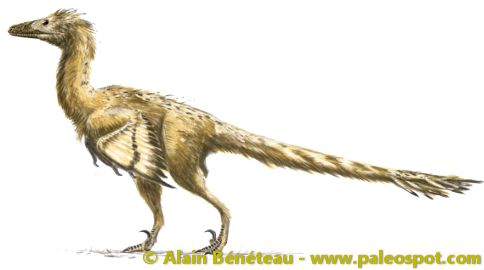 Reconstruction of a velociraptor. The colours of its plumage are hypothetical. © Alain Bénéteau