The theory of punctuated equilibrium

The theory of punctuated equilibrium was developed from the theory of evolution to explain the absence of transition fossils between species.

The principle of punctuated equilibrium

This theory was developed by the palaeontologists Stephen Jay Gould and Niles Eldredge, and therefore challenges the theory of gradualism.

In fact, it postulates that speciation did not take place gradually over time, which would have left fossils of specimens at different stages of evolution in the geological archives, but by sudden surges followed by periods of stability. Thus, the sudden appearance of a new species of fossil would be coherent.

Graphically, and according to this theory, the tree of life has branches that separate horizontally from the common trunk, synonyms of sudden speciation.

Arguments against this theory

Advocates of gradualism challenge this theory. First of all, the sudden explosion of species could be due to the attribution of the status of species to different fossil forms originating from a gradual evolution. Then, the apparent stability of fossils could be an illusion, as a large part of molecular and organic evolutions did not leave any fossil trace. 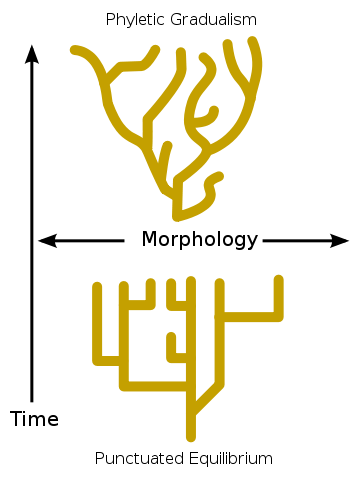