Thus, the oldest known fossil from a group cannot date back itself to the appearance of the group, as this group many have been represented before in lineages of which the members did not leave fossils, or in lineages for which fossils have not yet been found. These lineages are called ghost lineages.

Example of a ghost lineage

The existence of ghost lineages changes the date upon which different groups of living creatures are believed to have appeared. Here is an illustration:

In this example, the oldest known representatives of group A are more recent than those of group B. Groups A and B are brother-groups. They therefore share a common ancestor from which they evolved. The ghost lineage is highlighted (with the dotted line). For this same reason, one can say that the oldest known fossils from groups B and D do not presumably correspond to the appearance of their group... 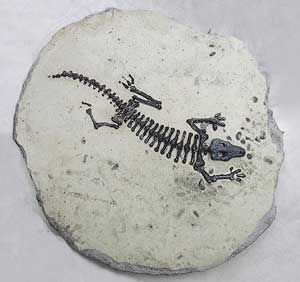 Fossils do not always allow us to determine when a species appeared, for some species do not leave fossils, these are ghost lineages. © DR