Concavenator is a dinosaur newly discovered in 2010 and to date is the oldest representative of the Carcharodontosauridae family. Discovered in Spain, it lived during the lower Cretaceous. It is of a relatively small size for this family (at least 5 metres) and has two singular characteristics: the presence of at least one hump on its back, as well as the presence of feathers on the forearm.

Its feathers evidently were not used for flight. They remind us once again that birds come from dinosaurs, and that the appearance of feathers is not linked to flight.

Despite the very good state of conservation of the Concavenator skeleton, we do not really know what its hump looked like; nor whether it had other appendages besides these feathers. The reconstruction of its appearance is therefore more hypothetical, giving a free reign to the imagination of paleoartists. 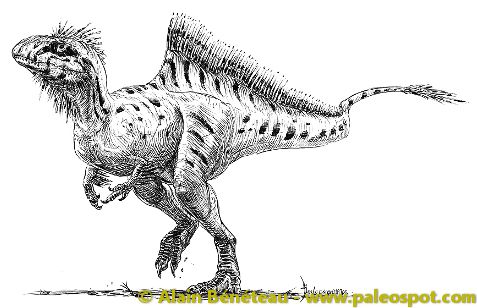