Caudipteryx is a feathered dinosaur similar to the Oviraptor, which lived in China during the lower Cretaceous. Its body was covered in down and symmetrical feathers that did not allow it to fly: its back limbs made it an exclusively running animal. It therefore has a strong resemblance to modern day ostriches, but was the size of a turkey.

For a certain period of time, it was classified with non-flying birds, but recent phylogenetic analyses place it among the oviraptor dinosaurs, the parrot headed group of dinosaurs. Unlike birds, the Caudipteryx’s tail consisted of vertebrae not reduced to a rump (pygostyle).

One specimen of Caudipteryx was discovered with gastroliths in its abdomen. Gastroliths are pebbles that birds, for example, ingest to help them grind and digest hard food, which is proof that it had a quite diverse diet. 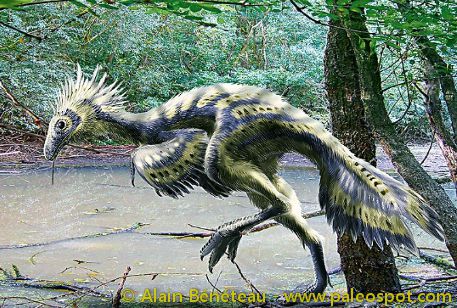 Reconstruction of Caudipteryx. The colours of its plumage are hypothetical. © Alain Bénéteau