The allosaurus is a theropod dinosaur that lived during the upper Jurassic in North America (many skeletons have been found in the Morrison formation) and Western Europe (a species was described in Portugal in 2006). The largest adult allosaurus could measure over 12 metres long and weigh 4 to 5 tonnes. This is the most studied carnosaurus given the number of its fossils discovered.

Allosaurus was a slender, predatory dinosaur. Its good running ability and powerful jaws undoubtedly made it quite formidable during its time. Meal remains of an allosaurus called "Big Al II" show that it may have fed on small ornithopods, such as Othnielia, as well as fish. A track shows that it might also have attacked much larger prey such as sauropods (Apatosaurus and Diplodocus). In this case it had to form groups to attack in packs. Analyses of its footprints make it possible to estimate its running speed (about 34 km/h). 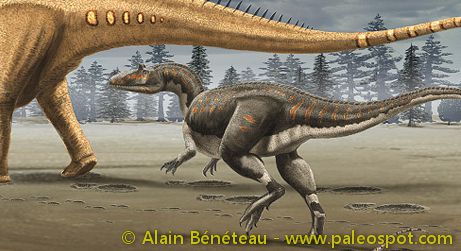 Reconstruction of an Allosaurus attacking a Diplodocus. © Alain Bénéteau