The Wilson Cycle describes the different stages from the opening and appearance of an ocean, to its closure and disappearance.

Stages in the Wilson Cycle

The cycle begins with the formation of a rift caused by the rupture of the continental lithosphere, following the separation of two tectonic plates. A fault-block valley then forms, which is currently the case in the Horn of Africa.

When this valley comes into contact with an ocean, it fills with water and forms a sea whose bottom consists of a central ridge and a young oceanic lithosphere. The Red Sea is a perfect example of this.

Accretion continues near the oceanic ridge and thus creates oceanic lithosphere, while the ocean extends and widens, as is the case in the Atlantic.

Over time, the density of the ageing oceanic lithosphere increases, and leads to its submersion under another oceanic plate or under a continental plate. This subduction causes earthquakes and volcanic activity on the edges of the converging plates, whilst island chains, accretion prisms and mountain ranges are formed. This is what is currently happening along the Andes and along Japan.

Finally, the ocean shrinks to a simple sea, as is the case with the Mediterranean Sea, before disappearing with the collision of continents. A continental suture then forms with the rise of a mountain range, such as the Himalayas. Rocks from the old oceanic lithosphere, or ophiolites, can be found in these mountains.

Then, one day, the cycle begins again and a new rift appears…

Consequences of the Wilson Cycle

Wilson Cycles therefore also cause continental drift, with the formation and breakup of supercontinents, and the formation of mountain ranges. 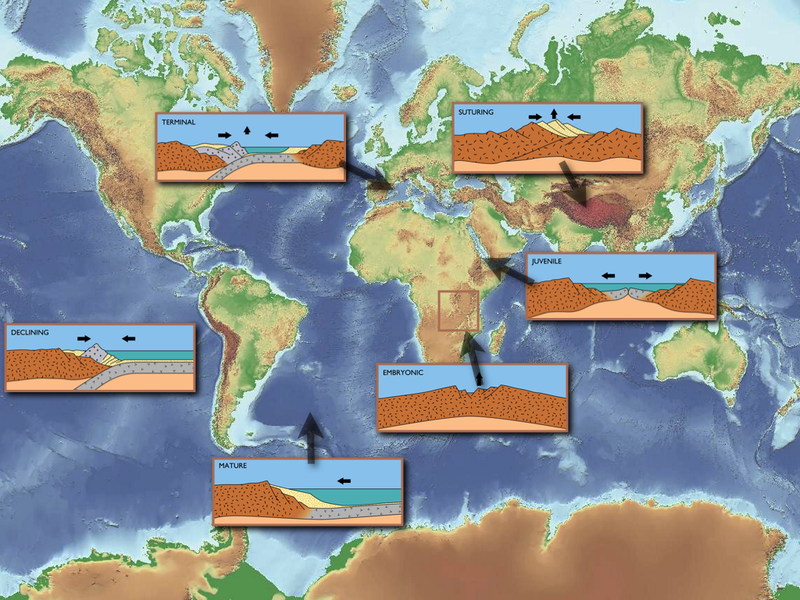 The different stages of the Wilson cycle that can be observed on the planet: embryonic, juvenile, mature, declining, terminal and continental suture. © Hannes Grobe, Wikimedia CC by-sa 2.5