Vitiligo is an epidermal condition in which depigmented spots appear and develop on the surface of the skin.

It affects between 1 and 3% of people and appears to equally affect all ethnic groups, men and women. The mechanism responsible for it is still not known. In most cases the disease develops before the age of 20 years old.

The disease targets the melanocytes, the cells responsible for producing melanin which gives the skin its colour. Disappearance of these cells leads to depigmentation of the skin. Several genes are suspected to be involved in development of its symptoms and other theories have been advanced.

Extreme stress can also cause vitiligo.

Vitiligo is not contagious but as it appears to have genetic origin, it is very probably transmitted from parents to children. Vitiligo is not hazardous to health.

Several treatments are now offered to try to get rid of it although none is truly effective. Some, nevertheless, can repigment some of the affected areas but always only partially. The side effects are sometimes more troublesome than the condition itself.

Of these treatments, ultraviolet light irradiation is often used. Corticosteroids are also used. Vitiligo can also sometimes be triggered by stress. In this case patients must receive psychological treatment. Finally, surgery can be considered by injecting melanocytes into the depigmented areas.

Skin grafts are even performed in some cases. 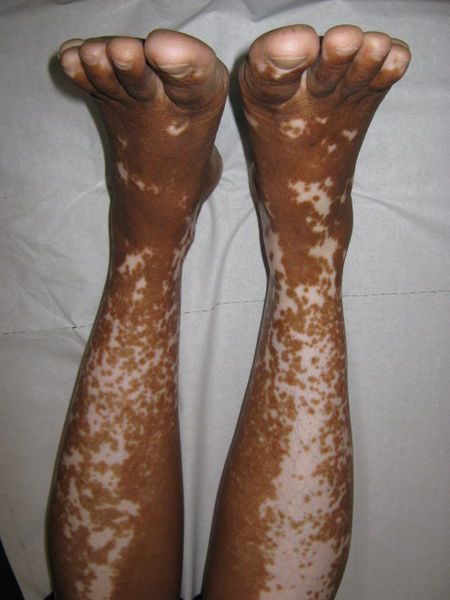 The discolouration of skin which causes vitiligo may affect more or less widespread areas of the body. © Grook Da Oger, Wikipedia