The bacterium Vibrio cholerae is the agent which causes cholera.

Vibrio cholerae (or the cholera vibrio or the comma bacillus) is a Gram negative curved-rod shaped proteobacterium discovered by Filippo Pacini in 1854 and later rediscovered by Robert Koch. It also has a flagellum which gives it motility.

It usually lives in aquatic ecosystems, although human beings also constitute a reservoir.

The O1 strain has two circular chromosomes with four million base pairs which code for 3,885 genes.

Epidemics are causes by two sera types, O1 and O139. The other known strains are not pathogenic to humans.

The bacterium is not strictly speaking pathogenic but usually contains a CTX prophage (a virus incorporated into the bacterial genome) which codes for cholera enterotoxin, and is responsible for the symptoms of the disease. 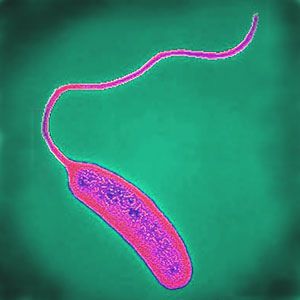