Mycobacterium tuberculosis, or the Koch bacillus, is the main agent responsible for tuberculosis, and infects a third of the population worldwide, killing more than 2 million people each year.

Researchers have performed detailed genetic analyses on very rare strains, responsible for human tuberculosis in Eastern Africa. They found that these rare bacilli are the current representatives of the progenitor species of M. tuberculosis. The genetic differences between M. tuberculosis and the rare East African strains suggest that all of these bacilli derive from a common ancestor, 3 million years ago, at the same time as the first hominids living in East Africa. Only one clone of the progenitor species is believed to have spread throughout the world in waves of migration by our ancestors.

Molecular analysis also shows traces of gene exchanges before the spread of M. tuberculosis. These processes may have played a critical role in the adaptation of this pathogen to human beings and contributed to its evolutionary success.

Tuberculosis is a contagious disease, spread by the Koch bacillus. This infectious agent is transmitted in the air via droplets contaminated by the bacterium suspended in air coming from patients. Inhaling a small number of infected droplets is sufficient for a person to become infected. On average an untreated tuberculosis patient can infect 10 to 15 people a year. Population movement (travellers, war refugees, the homeless in industrialised countries) have widely contributed to the spread of the disease over the planet in the last 40 years. In 1995, 30% of people of No Fixed Abode were infected by the tuberculosis bacillus in San Francisco, and 25% of the NFA in London.

More than 2 million cases of tuberculosis a year occur in sub-Saharan Africa. This figure is increasing rapidly because of the AIDS epidemic that particularly affects this region of the world. Almost 3 million cases of tuberculosis are recorded annually in South-East Asia. More than 250,000 cases occur in Eastern Europe each year. There are around 6,000 new cases each year and 700 deaths each year in France. The incidence in Ile-de-France is 2 to 4 times higher than the rest of the country.

Not all people infected with the Koch bacillus develop the disease: only 5 to 10 per cent of them will develop tuberculosis. The bacillus can remain " dormant" in the body for years. Immunosupressed people are more at risk of developing tuberculosis once they are infected, particularly patients with AIDS. The HIV virus and the Koch bacillus form a fatal association, each of the two infectious agents helping the other to progress. Tuberculosis is also the main cause of death in AIDS patients. It is responsible for the death of a third of patients with AIDS throughout the world and 40% of AIDS deaths in Africa.

BCG is not a wholly effective vaccine. Although it is very useful to prevent serious forms of the disease in young children (where it is almost 90% effective), it only protects 50% of adults. Therefore, it cannot prevent transmission of the disease or stop the worldwide epidemic. Active research into new vaccines for tuberculosis is ongoing although only one phase I clinical study is currently underway in Europe. Two other studies are in preparation in the United States.

Consult the full section for more information about tuberculosis. 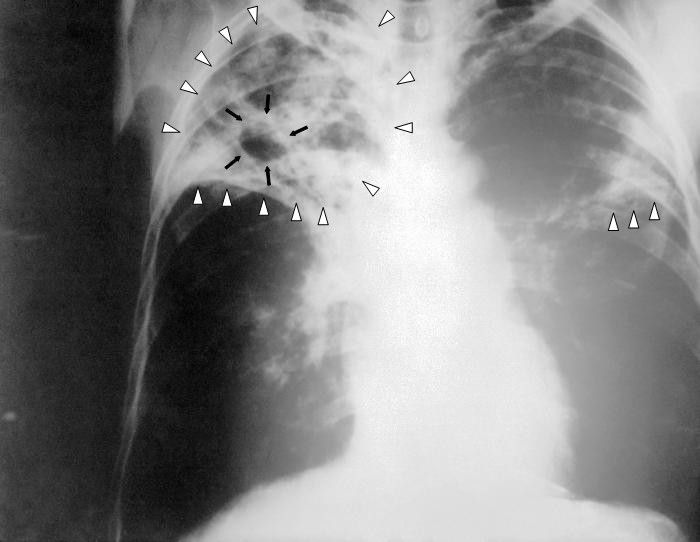 Tuberculosis is an infectious disease affecting the lungs. © DR