Toxoplasmosis is a parasitic disease caused by the protozoon Toxoplasma gondii. It mostly infects warm-blooded animals including human beings. Cat species are the obligate hosts . The disease is mild or even asymptomatic in the great majority of cases. A third of the population worldwide is even thought to be infected. However, it is dangerous to the seronegative pregnant woman (a person who does not have antibodies against toxoplasmosis in their blood) as she may transmit the Toxoplasma to her foetus. The resultant toxoplasmosis can even sometimes kill the foetus.

Toxoplasmosis is transmitted by cats. The Toxoplasma colonises the cat's small intestine and is excreted in their faeces. The disease only develops if these parasites are ingested. The risk is therefore low and occurs at the time when the cat litter is changed .

Toxoplasmosis is asymptomatic in the very great majority of cases. Only immunosuppressed people (such as AIDS suffers) are at risk of the effect of a parasite. They can then develop lesions in their eyes, cardiac, respiratory and even nervous systems combined with a fever.

Toxoplasmosis is transmitted from the mother to the child across the placenta, only if the mother is seronegative (if she does not have antibodies against the parasite). The risk of transmission increases during the pregnancy and reaches a peak after 36 weeks of gestation. On the other hand, the later the foetus is infected the less severe the infection is. During pregnancy: 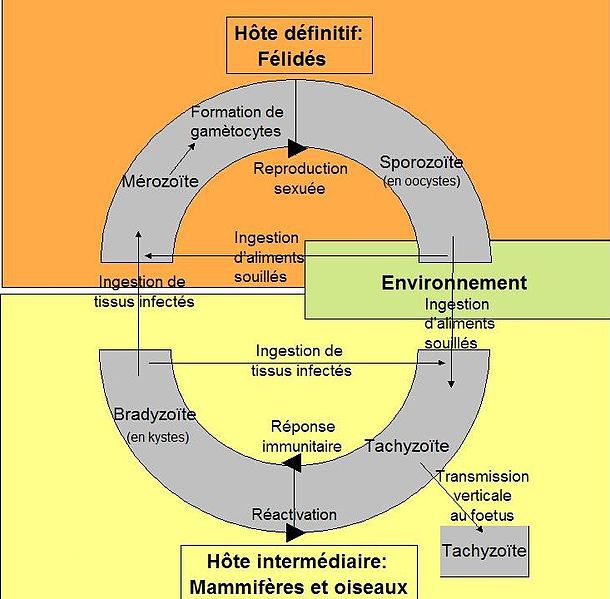 During the life cycle of the toxoplasmosis vector in passes through several phases and changes host before obligate infection of a cat species. © Powch, Wikipedia, cc by sa 3.0