Smallpox is an infectious disease caused by a Poxvirus. Smallpox has now been eradicated.

Smallpox is caused from an infection by viruses belonging to the Poxviridae family, of the Orthopoxvirus genus, which also causes other human diseases (including cowpox and monkey pox).

Smallpox has now been completely eradicated, but was transmitted very easily from an infected person to a healthy person in the rash phase through droplet spread or contaminated materials (bed linen, etc).

After an incubation period of 12 to 14 days, symptoms of temperature, back and abdominal pain and vomiting develop. The most obvious finding is development of a rash on the face and limbs, then developing on the rest of the trunk of the body during the second and third day. Smallpox can be haemorrhagic, which it is very often fatal. In contrast the death rate in other cases is 20 %. The large number of pustules on patients who recover, leave visible life-long scarring.

Smallpox still has no effective treatment but has been completely eradicated since 1980 because of successful vaccination campaigns. A few strains are still stored for study under strict supervision in laboratories. 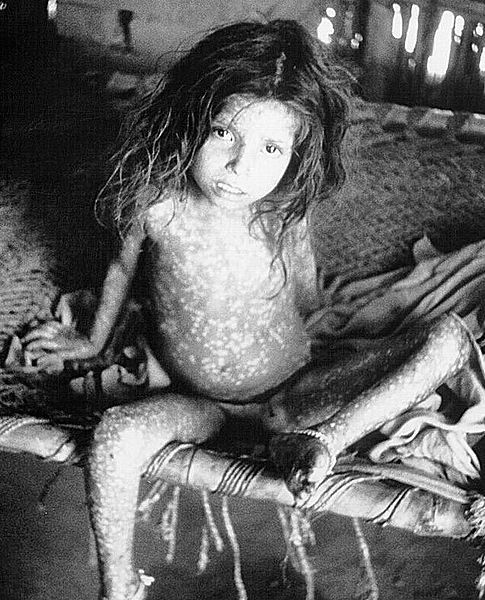 Smallpox is a viral disease that has been eradicated by vaccination campaigns. © DR