Respiration is a physiological process that supplies the body with oxygen and removes carbon dioxide from it.

The two movements of respiration, inspiration and expiration, are controlled by the autonomic nervous system (it is therefore an unconscious function) and is adapted to the body's needs, depending on effort.

Inspiration is achieved by contraction of specific muscles (diaphragm, intercostal muscles) which reduce the pressure in the lung and trigger air entry. Expiration is the relaxation of the muscles and air leaving the lungs.

The lungs are the place where respiration takes place

Human beings have two lungs which are composed of hundreds of millions of small pulmonary alveoli connected to the external air by the upper respiratory tract. They are the place where gas exchange with blood takes place, and where red blood cells release carbon dioxide and take on oxygen, both of which are molecules that can bind to haemoglobin. 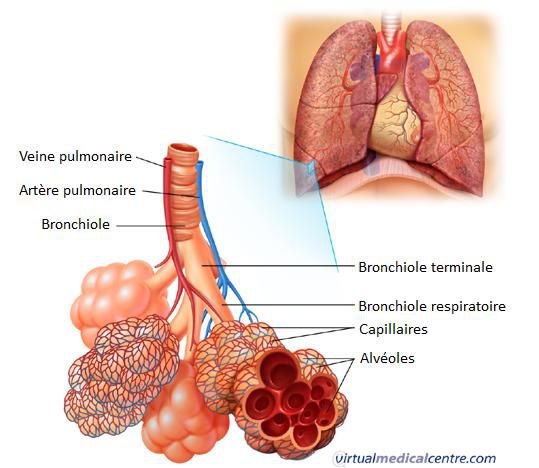 The pulmonary alveoli are located in the lungs and enable exchange of respiratory gases. © Virtual Medical Centre