Progesterone is the steroid hormone involved in the preparation of the body for pregnancy.

Progesterone is a sex hormone similar to estrogen produced by the yellow corpus luteum of the ovaries or from pregnenolone in the placenta in response to the effect of luteinising hormone (LH). Its concentrations change during the menstrual cycle, increasing significantly after ovulation (on the fourteenth day of the cycle) and falling rapidly if fertilisation does not occur.

The suprarenal glands and testes also produce small amounts of progesterone. The compound is also found in some plants, such as Hollatrhena floribunda.

It prepares the uterine mucosa for egg nidation in the event of fertilisation and abolishes rhythmic contractions of the uterine muscles. It also inhibits further ovulation during pregnancy.

Progesterone and some of its derivatives are able to block ovulation (but also increase the density of the cervical mucus, a barrier to spermatozoa), which enabled the American Gregory Pincus to develop the contraceptive pill (1953).

The chemical formula of progesterone is C21H30O2. It is a steroid hormone derived from pregnenolone, which itself is derived from cholesterol. 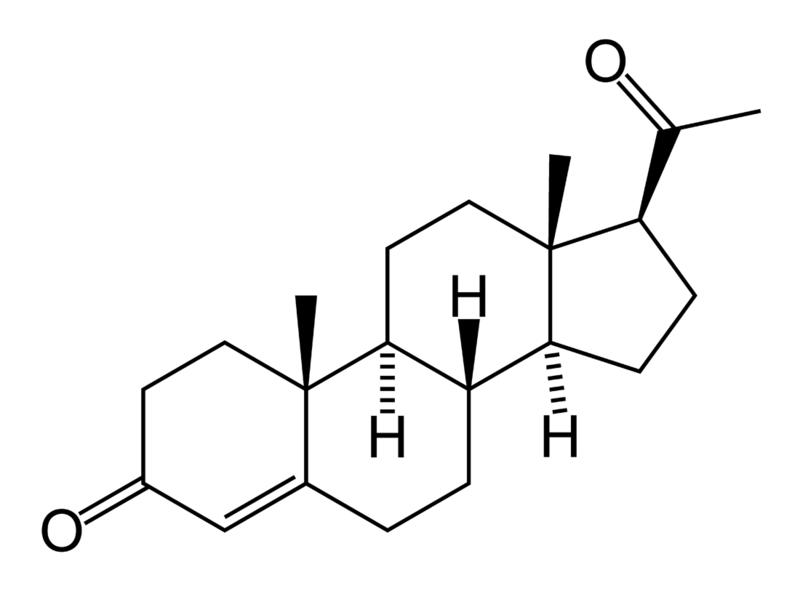