The plague is a serious infectious disease, caused by the bacterium Yersinia pestis.

Transmission of the plague

The plague is above all a zoonosis affecting small animals and their fleas. The bacterium, Yersinia pestis, can also infect human beings. It is transmitted from animals to human beings by bites from infected fleas, direct contact, inhalation or, more rarely, by eating infected material.

The plague is endemic in many African countries and countries in the former Soviet Union, in the Americas, and in Asia. There were 2,118 cases in 2003 reported in 9 countries, 182 of which were fatal. 98.7% of the cases were reported in Africa and 98.9% of the deaths. Nowadays, the distribution of plague coincides with its natural geographical location.

Symptoms of the plague

Plague is a very serious disease in human beings with a fatality rate of 30 to 60% if not treated.

The infected person generally presents with a " flu-like illness" after an incubation period of 3 to 7 days. Typically, patients develop sudden onset fever, rigors, headaches, and pain throughout their body, generalised weakness, nausea and vomiting. Three different clinical forms of the disease are seen depending on the route of infection:

Treatment of the plague

Prevention of the plague

The aim of preventative measures is to inform populations about areas in which the plague is active in animals, together with precautions to take against flea bites and how to handle animal carcasses in endemic areas. Direct contact with infected tissues or exposure to patients suffering from pulmonary plague must be avoided. 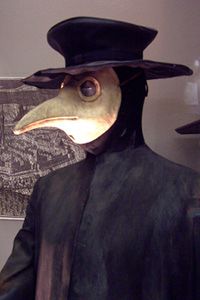