Noma is a form of gangrene, that is tissue necrosis which develops in the mouth and tissues of the face. Etymologically, noma means "devour" and therefore creates gaping holes in the patient's cheeks. The main victims are pre-school age children due to a lack ofhygiene and malnutrition. It is a disease of the poorest countries. There are believed to be 500,000 new cases each year, mostly in Sub-Saharan Africa. Untreated, 80% of infected people die from the disease.

The essential factors for noma developing in children are very poor hygiene conditions and significant malnutrition. The precise mechanism of noma is still only partially understood. Bacteria and viruses, possibly combined with an immune system deficiency (due to malnutrition or immunosuppressive diseases such as AIDS) are believed to be responsible for the tissue necrosis that is cell death. Noma starts from the gums and then attacks the rest of the mouth and cheeks.

There are several treatments when noma develops :

Care is needed when the wounds are healing in case the infection recurs. Mouth movements can delay the healing process and cause severe pain. Facial surgery is possible although less than perfect. It is not widely used because people suffering from noma are so poor. 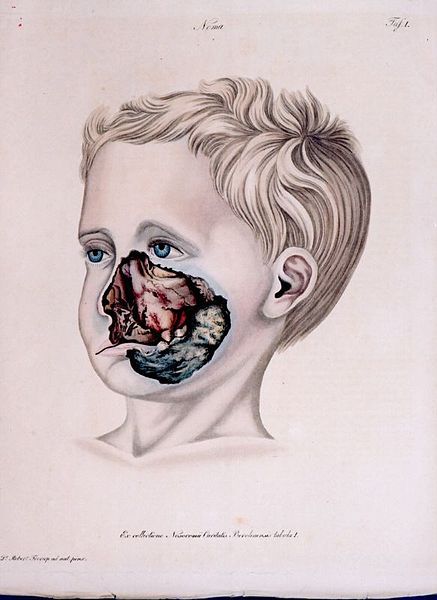