Despite the existence of a safe, effective vaccine, measles is still a major cause of death in young children. It is estimated that 454,000 people died from measles in 2004 the majority of whom were children.

Measles is one of the most infectious diseases known. Almost all non-immunised children catch it if they are exposed to the virus. It is an acute viral disorder caused by a virus belonging to the Paramyxoviridae family. It is a respiratory disorder and because of this the virus normally grows in the cells lining the pharynx and lungs. Measles is a human disease and no animal reservoir is known.

The first sign of infection is generally a high fever which develops approximately 10 to 12 days after exposure and lasts for 1 to 7 days. The clinical picture during its initial stage may include rhinorrhoea (dripping nose), cough, red eyes, increased tear formation, and small whitish spots on the internal surface of the cheeks. The rash on the face and upper neck usually appears several days later. The rash extends to the lower parts of the body over approximately three days, reaching the hands and feet. It lasts for 5 to 6 days before regressing. It is seen 14 days after exposure to the virus, within a range of 7 to 18 days.

Measles is often an unpleasant but mild or moderate illness. Severe disease occurs particularly in young, undernourished children, particularly those with inadequate vitamin A intake or whose immune system has been weakened by HIV/AIDS or other diseases.

In general, children do not die directly from the measles but from its complications. These are more common before the age of 5 years old or in adults over 20 years old.

The most serious complications include blindness, encephalitis (a dangerous brain infection causing inflammation), severe diarrhoea (which may cause dehydration), ear infections, and severe respiratory infections such as pneumonia which is the commonest cause of death from measles. Encephalitis is estimated to occur at an incidence of 1 case in 1,000, whereas otitis media (infection of the middle ear) is believed to occur in 5 to 15% of cases and pneumonia in 5 to 10% of cases. The mortality rate in developing countries is generally 1 to 5%, although this may rise to 25% in populations with severe malnutrition or poor access to care. People who recover from measles are immune for life.

Populations most exposed to measles

Unvaccinated people, particularly young children, are exposed to a higher risk of measles and its possibly fatal complications. Measles also affects other age groups if they have not been vaccinated, including older children, adolescents, and young adults. Anyone who has not been immunised, either by having been vaccinated or by having had the disease in the past, can be infected.

The mortality rate from measles is particularly high in countries at war or which have recently been at war, or have had civil disorders or natural disasters. The infection rate then rises exponentially because of damage to infrastructure. Health services stop routine vaccinations and the overpopulation in refugee camps and the arrival of displaced people considerably increases the risk of infection.

The measles virus is extremely infectious and spreads through droplets suspended in the air (projected by patients sneezing or coughing), by close contact between people, or from direct contact with nasal or laryngeal secretions from infected people. As a result, it has a strong tendency to occur as epidemics that can cause large numbers of deaths, particularly in young malnourished children.

The virus remains active and infectious in the air and on contaminated surfaces for two hours. Infected people can transmit it for four days before the skin rash develops and the next 4 days. If a person becomes ill, many close contacts will also become infected.

Appropriate clinical management can avoid the serious complications of measles. General nutritional support and treatment of dehydration with oral rehydration solutions are required. Antibiotics are prescribed to treat eye and ear infections and pneumonia. Adequate fluid and nutritional intake are important to improve the survival of children with measles.

Any child who has been diagnosed with measles in developing countries is given two doses of a vitamin A supplement, 24 hours apart. Administration of vitamin A at the time of diagnosis can help to avoid the eye damage and blindness. It has also been shown to reduce the mortality from measles by 50%. 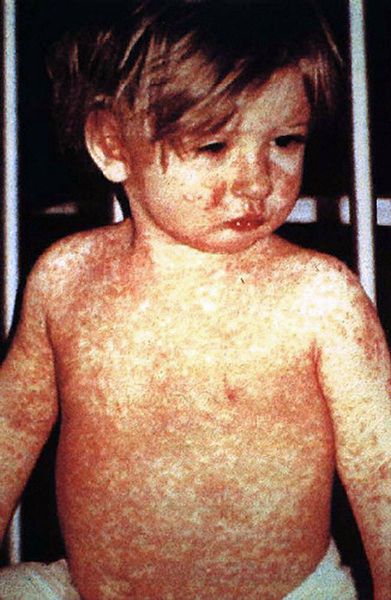 If not treated, measles can become a serious disease. © DR