Listeriosis is a disease caused by the infection by a bacterium Listeria monocytogenes that affects both animals and human beings.

Listeria is a so-called ubiquitous bacterium which is present in different materials such as soil, water and the digestive tract of animals.

The bacterium was discovered in the 1920s and like most bacteria does not tolerate high temperatures, although it does tolerate temperatures of around 4°C in refrigerators. The incidence of the disease in France is two to three cases annually. Apart from sporadic cases, epidemics can can be caused by food contamination. There are standards limiting the amount of Listeria in food products. Its content tends to increase from production until consumption because of breaks in the "&amp;nbsp cold chain ".

Listeriosis causes various symptoms from gastrointestinal infection to septicaemia and meningoencephalitis. It can be fatal particularly in the elderly, in pregnant women and in immunosuppressed people.

As with all bacterial diseases, the preferred treatment is antibiotic therapy. Bacteriophages (bacterial viruses) are also believed to be effective food additives preventing growth of listeria on foods.

Bacteriological tests are used to determine whether or not infections are due to micro-organisms from the same strain, i.e. from divisions of the same bacterium. The Listeria genome was sequenced at the start of the decade 2000-2009, which should enable faster diagnosis of the disease and the foods responsible for epidemics to be identified more quickly. 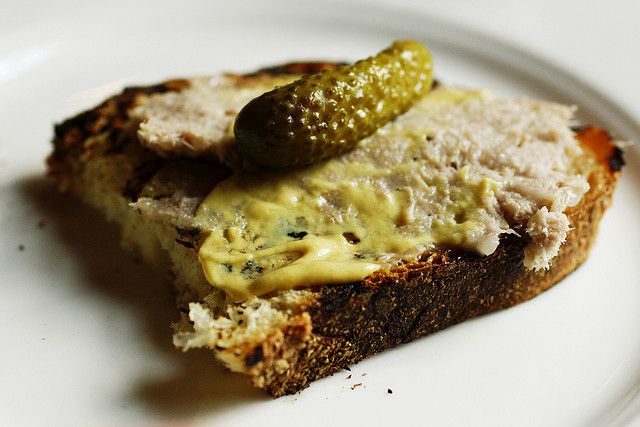 Foods contaminated by Listeria (such as patés) are responsible for cases of listeriosis. © Roboppy, Flickr, CC by-nc-nd 2.0