Legionella pneumophila is a bacterium which lives naturally in the environment and grows in warm water and warm damp places. It is commonly found in lakes, rivers, streams, thermal springs and various other aquatic environments. It is also found in earth and in potting compost.

Legionella pneumophila was first identified in 1977 and was the bacterium responsible for an outbreak of serious pneumonia in the centre where a convention was held in the United States in 1976. Since then it has been associated with various outbreaks linked to poorly maintained artificial water circulation systems, particularly air cooling in air condensers used for climate control in air conditioning and industrial cooling systems, hot and cold water circulation systems in public and private buildings and spa baths.

After being inhaled in sprays, bacteria in droplets are absorbed through the pulmonary alveoli and then invade macrophages, and immune system cells, that they then destroy.

The number of Legionella bacteria needed to cause infection is not known. However the infectious dose may be low for susceptible people as cases of infection after exposure to the source in several outbreaks has been reported after only a few minutes, together with infection in people up to 3.2 kilometres from the source. Development of infection depends on several factors: the extent of water contamination, how effectively sprays are formed and the effective spread of bacteria through air, host factors and virulence factors for the strain of Legionella responsible.

Legionellosis is a generic term used for pulmonary and non-pulmonary forms of Legionella infection.

The non-pulmonary form is an acute flu-like illness from which the victim recovers spontaneously two to five days. The incubation period ranges from a few hours to 48 hours. The main symptoms are temperature, chills, headaches, deterioration in general health and muscle pain (myalgia). This type of infection is not associated with deaths.

Pulmonary legionellosis has an incubation period of two to ten days (although this may be up to 16 days as seen in recent well-documented outbreaks). The initial symptoms are temperature, loss of appetite, headaches, general deterioration in health and lethargy. Some patients also develop muscle pain, diarrhoea and confusion. These symptoms are often combined with an initially mild productive cough in up to 50% of patients. Bloody sputum or haemoptysis is seen in approximately a third of patients. The disease varies in severity from a mild cough to a rapidly fatal pneumonia. Death is due to progressive pneumonia accompanied by respiratory failure or shock and multi-organ failure.

If not treated this form of the disease generally deteriorate during the first week. As with other severe pneumonias the most common complications of legionellosis are:

Complete recovery is generally obtained with antibiotics after a few weeks or even several months. A progressive pneumonia occasionally develops in which the treatment fails and occasional cerebral complications develop.

The mortality rate of legionellosis depends on the severity of the disease, appropriate initial anti-microbial treatment, the conditions in which the Legionella has caused the infection and on host factors (the disease is generally more serious in immunosuppressed people). The mortality rate may be as high as 40 to 80% in untreated immunosuppressed patients but may be reduced to 5 to 30% with appropriate management depending on the severity of signs and clinical symptoms. The mortality rate in people who are able to produce an immune response is generally in the 10 to 15% band. 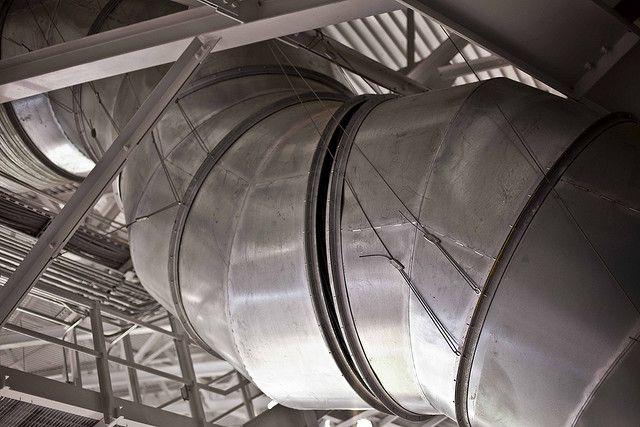 Air conditioning pipework is a good environment for the bacteria responsible for legionellosis to grow. © John Pozadzi, Flickr, CC by-nc-sa 2.0