Features of the Koch bacillus

The Koch bacillus was discovered by Robert Koch in 1882 and was entirely sequenced in 1998.

Although it is not permeable to Gram staining (because of its external waxy layer), these bacteria are netherless deemed to belong to the Gram positive group as they have no external membrane.

The bacterium is rod-shaped and contains a circular chromosome with more than four million base pairs coding approximately 4,000 genes.

The bacillus infects the respiratory tract where it causes the symptoms of tuberculosis. Although research is progressing, not all the virulence factors have been clearly established. They appear to be a set of factors and not a single one.

The bacillus may also hide in adipose cells where it is shielded from antibiotics. It can then re-emerge in patients who seemed to have been cured. 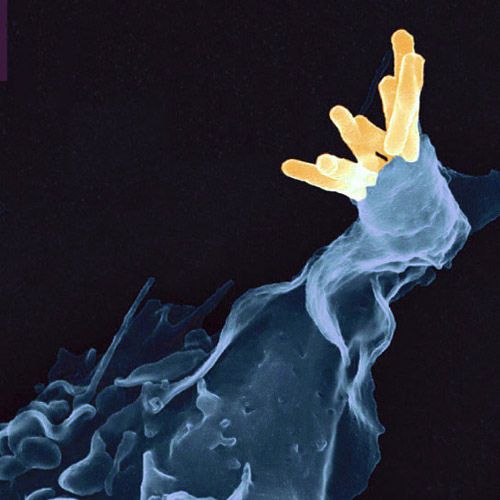 The Koch bacilli can be phagocytosed by immune cells. © AJC1, Flickr, CC by-nc 2.0