Influenza is a variety of contagious viral infections caused by the influenzavirus.

The infectious agent is a virus belonging to the Orthomyxoviridaefamily, the genome of which contains eight segments of RNA. These RNA are grouped together in the same viral particle, enveloped by a lipid membrane onto which proteins are anchored.

The different strains of influenza are defined by the proteins located on the surface of the virus : haemagglutinin (H) and neuraminidase (N). The name of the virus depends on the type. For example, H1N1 or H5N1 which are amongst the best known.

Influenza is transmitted between human beings through saliva and nasal secretions. Hygiene measures (washing hands, wearing a mask) can protect against transmission of the virus.

Transmission may also occur from animals to human beings, for example, in avian influenza (bird flu).

There are no specific symptoms for influenza. They mostly occur in the respiratory system and involve congestion, sore throat, and weakness. Muscle aches, fever of over 38.5°C, headaches and joint pains also occur.

Whilst seasonal influenza is usually not serious, there are, nevertheless 1.000 deaths each year in France. These are usually in immunosuppressed people, or the very young or elderly.

Pandemic influenza occasionally causes far more deaths. An example of this is the Spanish flu in 1918-1920 which caused 100 million deaths throughout the world.

Vaccines are available each year to prevent seasonal flu. It is possible to use anti-viral agents to treat both the symptoms of influenza and the virus itself. Antibiotics are only prescribed in bacterial superinfection. 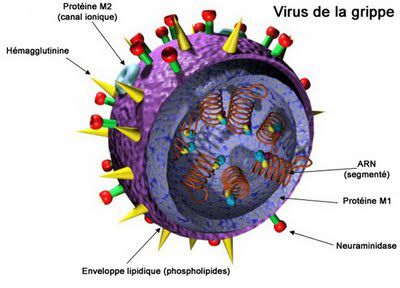 Diagrammatic representation of the influenza virus: the eight RNA fragments are closed within a particle exposing the viral surface proteins (haemagglutinin and neuraminidase). © DR