An egg is a female gamete developed by the ovary. Theegg is often confused with the oocyte as the female gamete in fact is an oocyte until the time of fertilisation.

Structure of the egg

The egg is a large cell (120 micrometres in diameter in human beings) and is larger than the spermatozoon. It is a haploid cell as it contains half of the genetic material of the person which is lost during meiosis in the oogenesis process.

Once the spermatozoon has fertilised the egg, it is no longer only an oocyte. In fact, the process of meiosis has not been completed and it remains in metaphase II. Fertilisation leads to the end of the meiotic process which allows the release of the third polar globule.

Function of the ovary

The ovule donates half of the genetic pedigree of the future embryo. As the egg is a gamete produced by a female person, its sex chromosome is always X (whereas the spermatozoon contains an X or a Y and determines the sex of the embryo).

After the egg is released by the ovary at ovulation, the gamete can only be fertilised by a single spermatozoon in the first third of the fallopian tube. The fertilised egg then migrates to the uterus where it can be implanted. 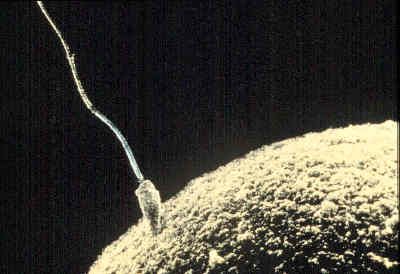 The female gamete is only called an egg once it is fertilised. © DR