DNA means deoxyribonucleic acid and is a support molecule for inherited genetic information.

DNA is a very long molecule containing a succession of nucleotides connected to each other by phosphodiester bonds. There are four different nucleotides: adenosine, cytidine, guanosine and thymidine, which have a very specific order in the chain and carry the genetic information.

DNA is formed from two complementary strands, rolled into a helix (double helix). Whilst it may have various forms (type Z and type A), DNA is usually in the B form, in which the double helix has the following features :

On a slightly larger scale, DNA in eukaryotic organisms, forms balls called nucleosomes in which the DNA is bound to proteins called histones. This assembly is tightly rolled and compacted into chromosomes which are located in the cell nuclei.

They are also found in some organelles such as mitochondrion and chloroplast.

DNA in prokaryocytes (bacteria, archea) is similar to DNA in eukaryotes although it is not bound to histones and lies in the cytoplasm. It is also usually found as circular chromosomes .

DNA is the genetic information support, that is, it carries thousands of genes in the form of successive nucleotides. The genetic code links each triplet of bases to a specific amino acid. There are estimated to be 40,000 genes coding for proteins in human beings, although strands of DNA also exist which code for RNA, sequences which regulate gene expression…

Role of DNA in inheritance

The original double helix structure of DNA allows it to duplicate into two molecules which are identical to each other and identical to the parent molecule during replication which takes place before cell division. The genetic information is therefore never lost and can be transmitted to new generations through the germ cells. 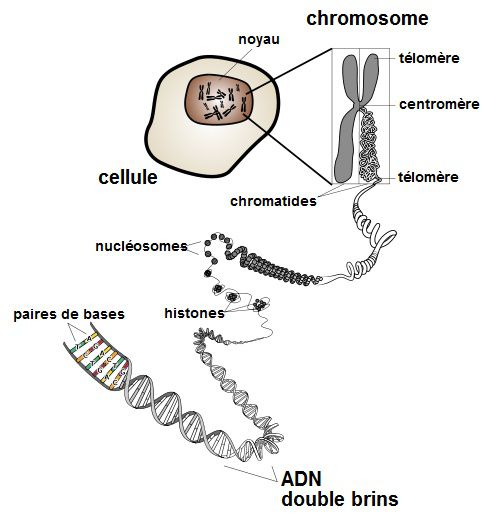 DNA, the support for genes, is a very well organised molecule. © Public domain