The Chikungunya virus causes "Chikungunya fever" or "CHIK", and was responsible for the major epidemic which occurred in Réunion in 2005.

Alphavirus belonging to the Togaviridae (Arbovirus group A) family. The virion is spherical, enveloped and 60 nanometres in diameter.

The virus can affect human beings, primates, other mammals and birds. Whilst the infectious dose is not known, it is known that it is transmitted by a bite from the Aedes sp. mosquito (A. aegypti, A. africanus, A. albopictus), and usually has an incubation period of between one and twelve days.

No cases of transmission between people have been confirmed. The "reservoir" is probably in primates, which causes a high viraemia although does not produce symptoms.

The virus is highly pathogenic and causes a "spontaneously resolving" illness, characterised by arthralgia or arthritis of the knees, ankles and small joints.

A high temperature develops, followed by a maculopapular rash and in some cases with buccal and palate enanthem, nausea, and vomiting. Mild bleeding may occur, particularly in children. Infections are commonly asymptomatic. Cases have already been previously reported in Africa, India, South East Asia and the Philippines.

There is as yet no antiviral agent, although it is very sensitive to disinfections such as ethanol, sodium hypochlorite, glutaraldehyde and lipid solvents. The virus is also inactivated by heat (above 58° C).

An effective way of protecting against Chikungunya is to combat the mosquitoes (tiger mosquitoes), and therefore their bites&amp;nbsp.

The management of patients is entirely symptomatic using analgesics and anti-inflammatory agents. People develop long-lasting immunity after they have been infected by the virus. 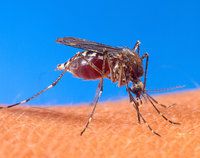 One of the mosquito vectors for the Chikungunya virus: Aedes aegypti. © DR