Burdock is a very common plant throughout the northern hemisphere. It is usually found on roadsides or in clearings. It is also called "giant burdock or&amp;nbsp "scalp grass" and like artichoke belongs to the Asteraceae family. It is particularly useful for its properties to treatacne.

Burdock has a stem which may reach a metre in height and has finely jagged large leaves. Its flowers are grouped together at the tip of the stem and are red or purple-violet, which contrasts with a greyish coloured root. The root is harvested in July just before the plant flowers. This is used for its medicinal properties in the same way as burdock leaves which are also often combined with wild pansy or nettle to soften their bitter taste in infusions.

Burdock, a plant with many properties

The burdock leaf is particularly used to treat pruritus (itching), chapping, grazes, cracked skin and insect bites. In this case it is used as a cream, lotion or ointment for topical application. The root is recommended to treat some cutaneous conditions particularly those such asacne, which develop mostly on greasy skins.

Burdock is also believed to act against infections which develop at the base of the hair and in the sebaceous gland (pilosebaceous infections), such as boils. It is also used to treat whitlows. In addition, as it has a diuretic, purgative effect, it is used to promote urinary and bowel excretion. The root is rich in sugars and is used as in infusions, extracts or capsules. Note also that burdock does not carry any risks of toxicity to adults. It is not however recommended for children under 15 years old. 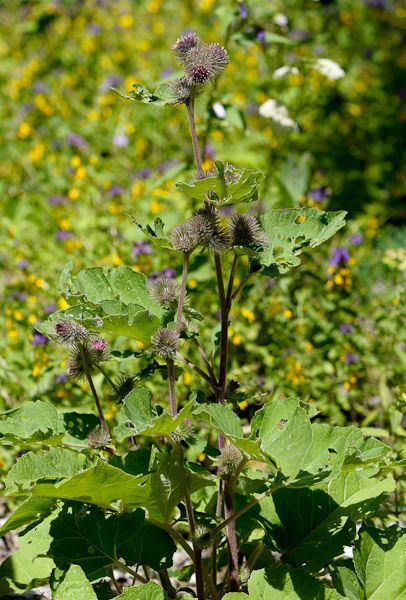 Burdock, is it effective against acne? © F. Le Driant /FloreAlpes.com