Autumn Crocus is a herbaceous plant with a bulb which produces long flowers in Autumn. The chant that made the plant famous in French goes "Crocuses in the fields, mean the end of summer". Although it is found throughout Europe, the crocus takes its name from Colchis on the edges of the Black Sea, associated in Greek mythology with the magician and poisoner Medea. There is nothing very surprising about this as the plant is extremely toxic. It is even occasionally in French called "dog killer".

There are more than a hundred varieties of crocus throughout the world. Most species are found in the Balkans and in Asia minor. The whole plant is rich in colchicine, a poisonous alkaloid. Poisoning from chewing the seeds or flowers of the crocus is often fatal. Poisoning causes increases salivation, vomiting, bloody diarrhoea, cramps and general paralysis. Like many plant or animal toxins, colchicine can also be used in pharmacy.

The parts harvested are the bulbs and seeds of the plant. The active substances in colchicine are isolated from these parts. It can be used in acute attacks of arthritis and in muscle and joint rheumatism. Colchicine is also effective to treat gout, a metabolic disease caused by excess uric acid. Gout causes extremely painful attacks and is often due to dietary excesses. The seeds also contain a large amount of lipids, tanins and sugar. 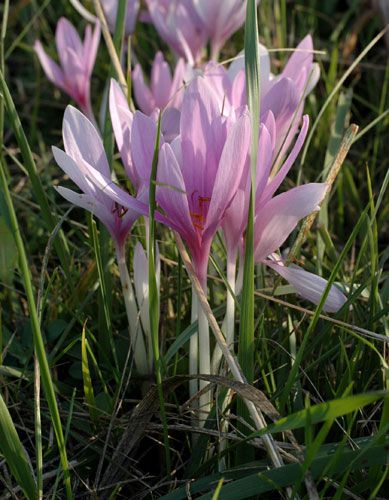