An antibody is a biological molecule involved in immunity.

An antibody is a protein complex. Whilst each organism with an immune system codes for billions of different antibodies, they all have the same overall features. They are glycoproteins belonging to the immunoglobulins family, formed from two identical heavy chains (H for heavy) and two identical light chains (L for light). They are often Y-shaped, with the two heavy chains being linked to each other by a disulphide bridge in the stem of the Y. The two light chains are bound to the heavy chains in the arms of the Y, and also by disulphide bridges.

Function of an antibody

The role of the antibody is to recognise a foreign antigen in order to neutralise it. They achieve this because of their highly specific paratope that only recognises a very specific part of the antigen: the epitope. Once an antibody recognises an epitope, the B lymphocyte, which codes for the specific antibody, multiplies and matures in order to be able to produce large amounts of the same useful antibodies.

There are five different types of antibodies: IgG, IgA, IgM, IgE and IgD (in order of their respective amounts present in the body). They have different roles. 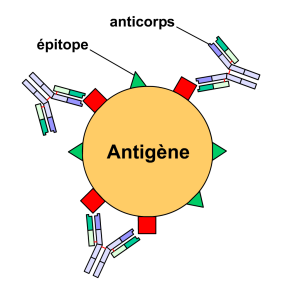