Anthrax is an infectious disease caused by the bacterium Bacillus anthracis.

The organism responsible for anthrax is a bacterium, Bacillus anthracis, the spores of which can live for many years or even decades in nature before being taken in by the next host. Above all, anthrax is a disease of herbivores although other mammals and some birds are known to contract the disease.

Transmission in human beings occurs directly or indirectly from infected animals or from occupational exposure to infected or contaminated animal products. The only way to reduce its incidence is therefore to combat the disease in livestock. There are no documented cases of transmission between human beings. The veterinary health and medical consequences of the disease can be catastrophic.

The disease still affects animals and human beings in most sub-Saharan African countries and in Asia, in many Southern European countries, in the Americas, and in some regions of Australia. The spontaneous outbreaks of anthrax are reported in herbivores in other countries.

Three forms of anthrax are seen in human beings:

At least 95% of the cases which occur in human beings throughout the world are the cutaneous form. These three forms of anthrax may be fatal if they are not promptly treated.

Antibiotic therapy generally produces spectacular recovery in the person (or animal) infected by the anthrax bacillus if it is started before or immediately after the onset of the initial symptoms. It can also be used for prophylaxis in asymptomatic people if it is thought that they have been exposed to spores.

Prevention of anthrax of human beings and animals is based on measures to combat the disease used in livestock in epidemic regions such as risk-free removal of carcases of animals suffering from anthrax and vaccination of at-risk herds. The most effective way of disposal is incineration which is performed to heat sterilisation of the underlying ground. In practice, the conditions in many endemic countries make these simple methods of combating the disease difficult to apply. Prevention in industrialised countries is based on strict hygiene measures in farms and industry .

Vaccines are available for animals and human beings. However, their use in human beings is reserved for high risk groups such as people who are occupationally exposed and some military personnel.

There is no need to isolate patients or to put them into quarantine. Dressings and other contaminated materials must be disposed of, preferably by incineration. 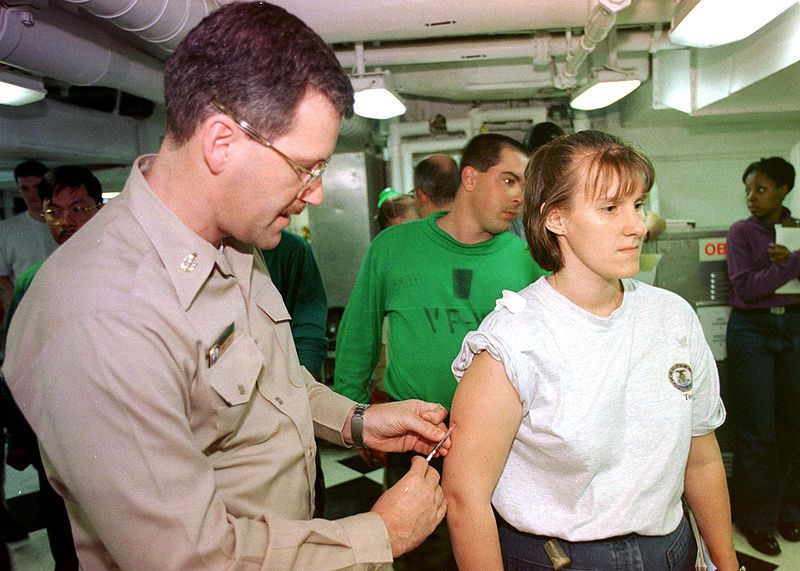 There is a vaccine against anthrax. © DR